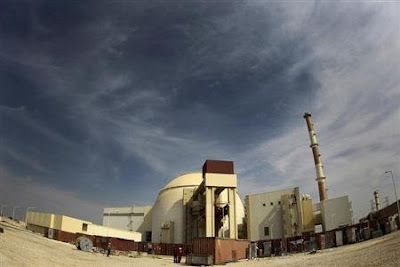 National emergency officials of the GCC countries, UAE, Bahrain, Saudi Arabia, Oman, Qatar and Kuwait, met on Sunday in Saudi Arabia to discuss the risk of radiation spreading over the Persian Gulf if Iran’s Bushehr nuclear power plant is damaged by another earthquake. A 6.3-magnitude earthquake struck close to the nuclear plant last week, but caused no damages. Iranian officials have said that the plant could withstand quakes of up to 8.0 magnitude.

The plant built on earthquake-prone Iran's southern coast is a growing worry for its neighbors, because the prevailing winds of the Gulf mean that if radiation ever does escape it would probably be blown over Qatar and the UAE.

“The earthquake that the Iranian city of Bushehr was subject to has raised a great deal of concern among GCC countries and the international community of a possible damage to the Bushehr nuclear reactor that could causing a radioactive leak, God forbid,” said GCC Secretary-General Abdulatif al-Zayani. (Reuters, 14 April)

“The GCC countries have previously warned against the danger of the nuclear reactor of Bushehr and the possible nuclear leak and its harmful effect on the environment in the Gulf,” Zayani added.
Iran sits on major fault lines and has suffered several devastating earthquakes, including a 6.6-magnitude quake in 2003 which flattened the southeastern city of Bam and killed more than 25,000 people.

These pathetic Arab petro-pimps of the Persian Gulf could not discern a nuclear plant from a hashish plant. They just parrot their US/Zionist masters.

The fun thing is if anything happens to Busheher, Iranian who mostly live in northern and central Iran (south is not much populated) will affect less than Arabs living in in the south of Persian Gulf.Iran even can evacuated the south if it become clear that Busheher is gonna explode but where UAE can go? ;) In a way,Busheher is a deterrence against these stupid enemies.

Notwithstanding some tasteless comments here, responsible Iranians need to be concerned for nuclear safety of their country. If having a nuclear industry is the nation’s right, this right comes with responsibility. Southeastern Iran is prone to earthquakes. The original decision to locate the first nuclear power plant in Bushehr, taken by the Shah’s government, was wrong. But the current government followed that plan and Iran now has the plant. But safety measure should be worked and reworked again and again. Loss of life at either side of the Persian Gulf due to possible damage to the plant caused by earthquake would be tragic, to say the least. I wish Iran was invited to attend the meeting in Riyadh and now it needs to take the initiative to sponsor a series of regional meetings on the topic of nuclear safety.i

These people are our enemies. They have just ill wishes for us. I don't care about their safety at all. As for safety, well the first step is to leave the sanctions against us and let Iran to have access to the latest tech etc. Under sanctions we have more important priorities than a hypothetical safety issue.

You sound really pathetic when you keep on about your rants about "US/Zionist masters" bullspit.

And you think radiation recognize borders or territories :o)

Very stupid comment by a regime Muppet regarding nuclear safety issues.So basically what your saying it's OK to crap on your next door neighbors doorstep.

I am sure that the iranian government does not subscribe to your irresponsible and borderline racist remarks. The world does not need to be united against the country for its lack of attention and commitment to nuclear safety issues. Earthquake in southeastern Iran is not hypothetical, it's when and how strong.

Nader UskowiApril 14, 2013 at 12:28 PM
Thats true to some degree,but you seem to be forgetting that the us prevented the iaea from helping iran even in the area of nuclear safety so responsibility cuts both ways,there are plenty of reactors that operate safely in earthquake zones bushehr was designed with earthquakes in mind.Personally I don`t think the arab stooges have any real or legitimate gripes about irans nuclear safety record its just another way to try and bash iran,its pretty sad and petty really but its just what I`d expect from a bunch of puppets

How hypocritical of these puppet regimes, where were they when the US was using depleted uranium ammunition on Iraqis or the Zionists doing the same in Lebanon and Occupied Palestine? These illiterate puppets are given a script from Foggy Bottom to bark without knowing even basic facts about nuclear technology. How many nuclear scientists do the Persian Gulf Arab stooges of PGCC have? ZERO combined with collective IQ of 70 (barely enough to dole out money to their US Zionist masters for junk and spread the joy in the brothels of US and Europe).

that person only sounds pathetic because he/she is parroting pathetic, bigoted foolishness. the most pathetic part is the failure to do anything like serious thinking.

Nader, I don't believe that the comment above by anon 12:35 is racist or xenophobic by a long shot. On the contrary, it these little Persian Gulf puppet pimps that have been doling out anti-"Persian" nonsense since their prime idiot Saddam invaded Iran in 1980 and even during the Pahlavi era on Arvand Rood issue.

These illiterate Bedouins are easy to manipulate on sectarian basis as the Wahabbi/Salafi creed is anti-education and anti-logic. Look at the mess they have created in wider Islamic world with alCIAda sponsored sectarianism and terror. So it is no surprise that these midgets would object to Bushehr peaceful nuclear power plant. This plant is operated under IAEA aegis and Irano-Russian expertise with ample safeguards and precautions in a seismic prone zone.

These corrupt wimpy PGCC pimps armed crazy Saddam and doled out $100 billion in 1980's dollar value to keep Iraq gassing and killing Iranians with US and European weapons including gas. None of comments directed by Iranians is ever racist, but a statement of FACT. In any case, we have millions of Arabs and other ethnic groups in multi-ethnic and largely tolerant Iran. When did you ever hear of Iranians killing each other on sectarian grounds like they regularly do in the Arab world from Syria, Egypt, Lebanon, Iraq to even in the rotting Saudi pimpdom where Shias are regularly murdered,tortured, expelled and imprisoned not to mention the pimpdom's repression in Bahrain.

I believe most Iranians do have an acute dislike for these foreign imperialist created upstart Khaleeji stooges who have continued with their anti-Iran propaganda on behest of their Whitehall masters. None of these puny pups could even wag their cowardly tails without approval from their Anglo-American and French masters. Most of these PGCC pimpdoms are occupied by foreigners anyway. I wonder why Egypt and Saudis don't raise the safety issue of the illegal Zionist Dimona reactor in the Negev which would wipe out most of Nile Delta population and Northern Arabian peninsula occupied by the al-Saud clan of corrupt Bedouin thugs.

It is mere exercise in usual anti-Iran barking by puppets indeed.

First of al, take a deep breath and stop hyperventilating. Second of all, the good news is that you and I are living in the West, so that if an earthquake ever damages this Russian reactor, we don't have to worry one bit about the consequences. We can enjoy our lives in the US, Canada, UK, etc. Nice and easy. Isn't it so?

The speed with which a discussion on Iran’s requirements for nuclear safety degenerated into anti-Arab diatribes probably more than anything else demonstrates how defensive the proponents of a nuclear Iran are regarding this vital, life-or-death issue. If Iran truly wants to become a regional nuclear power, it must put nuclear safety at the top of its agenda.

If one uses the cover of the nuclear issue to launch an anti iran diatribe then one should not be surprised to get the sentiment returned,its funny that they did not mention the aging dimona plant or the aging research rectors in the arab world but instead singled out the most modern reactor in the region this makes me very dubious about their sincerity,so I`m not surprised at some of the angry responses here and just because someone criticizes the puppet regimes does not make them anti arab by a long shot any more than someone criticizing irans government is anti iranian

.... " I don`t think the arab stooges have any real or legitimate gripes about irans nuclear safety record..."

what record??? there's only one nuclear power plant in Iran.... and it's been under the control of Russian technicians.

You may live in the "west" buddy boy but some of us don't. So don't trivialize the issue. It is this superficial tripe and double standards that are causing havoc in the world. Why do we not have a discussion on the Zionist Dimona plant that is the biggest threat to humanity and the world? Supposedly the illegal Zionist entity has 200 nukes with no safeguards or adult supervision whatsoever? SO WHO DO YOU THINK IS THE REAL THREAT?

Dimona has been operating for a long time and there are no safety issues.

it's no particular threat and Israel is not any more illegal than any other nation, despite your bigoted lies and general foulness of thought.

"Dimona has been operating for a long time and there are no safety issues"
How would one even know if there was,the facility is not under iaea monitoring and israel unlike iran is not a member of the npt.Dimona was built over 50years ago to provide bomb fuel and if its "no particular threat",tho` I suspect many would disagree with that statement,then irans bushehr built to provide power is definitely "no particular threat"

"there's only one nuclear power plant in Iran"
Wrong there are 2,the tehran research reactor and bushehr and a 3rd,the arak heavy water reactor thats currently under construction,both the trr,bushehr and irans enrichment facilities are monitored by the iaea and any accidents would be common knowledge.Bushehr is jointly operated by russian and iranian technicians this isn`t saudi arabia

Zionism is built on STOLEN LAND, GENOCIDE and LIES. Dimona is totally illegal like the Zionist entity itself and whole Zionist evil is falling apart anyway. Now stick that up your hasbara!

Today's 7.8-magnitude earthquake in Khash should serve as an eye opener for all who care about the nuclear safety of Bushehr reactor. Southeastern Iran is prone to major quakes.

Looks like you've missed your medication because I've noticed your delusional ranting has hilariously increased in the past few days.

neither the research reactor nor the heavy water reactor is a power plant, son.

and the one power plant has been under the control of the Russian techs all along and actual control probably hasn't yet passed to the uranians.

"neither the research reactor nor the heavy water reactor is a power plant, son."
Yes and?? what point are you trying to make exactly?,that the operation of the trr should not be taken as part of irans nuclear safety record,that seems very stupid as both are reactors regardless of size or output,as for the staff at bushehr they are a mixture of russian and iranian personnel how else do you expect the iranian staff to acquire the practical knowledge to operate it,thats just simple common sense.Next time try and have a point to your post