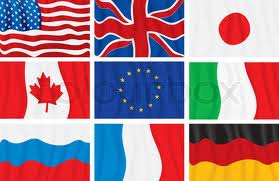 Iran's Foreign Ministry spokesman Ramin Mehmanparast said today that the recent communiqué of the foreign ministers of the Group of Eight (G8) countries about the Iranian nuclear energy and ballistic missile program was without merits.

“Iran's ballistic missile program is in line with the country's defense doctrine legitimately defending the sovereignty and territorial integrity of Iran and does not pose a threat to any country,” Mehmanparast said. He also reaffirmed the peaceful nature of Iran's nuclear program, saying its activities have been under the supervision of the IAEA. (IRNA, 17 April)

In their final communiqué after holding talks on 10-11 April in London, foreign ministers of the G8 countries expressed their deep concern over Iran's growing nuclear and ballistic missile activities.
The G8 member countries are the U.S., Russia, Canada, U.K., Germany, France and Italy. The EU is also a member.

So the Iranian space program and launching of rockets with satellites, appears to be another obstacle and condition for the West to consider lifting of majority if not all sanctions.

Couple months ago the US spokesman, Victoria Nuland, stated that by launching rockets, (with or without satelites), Iran wiolates UN Resolutions.

Based on that and recent facts as well as information, one can expect that restrictions if not major Iran's space program closures, will emerge as other conditions and pretext...for continuation of sanctions and threats against Islamic Republic.

I am wondering what would assume those on this blog, who have claimed that an agreement (with the West) was at hand during the Almaty negotiations, and that Iran is responsible for negotiations failure, because Iran failed to come to the terms with the West.

the world rejects the statement from the Iranian spokesman/parasite

@-They want to dominate the nation but it is very hard for them to subdue a technological savvy Nation -and this being the basis of the ill blood!

If by the "world" you mean usrael and its bootlicks,then its a very small world indeed

The only loathing is done by people like you.

Israel has more relations with the world than Iran under the isolationist Islamist terrorist crackpot theocracy. Khomeini,your imam said; "if only I could build a wall around Iran to isolate it from the world". Looks like his wishes are coming true and Iran will become like North Korea soon.

I guess you missed out on iran hosting the non aligned nations summit last year,its not iran that looks increasingly isolated

No I didn't miss that circus act by loser nations like North Korea,Zimbabwe,Cuba,Syria,Sudan etc etc
Israel has relations even with some of those nations. Can you say that about Iran under the Islamist terrorists having normal relations with the world which includes America and Europe?

Last time I looked the non aligned movement was made up of 120 nations,quite a far cry from the small handful you just mentioned,and it was the europeans who chose to cut their own throats vis a vie iran,they made that choice themseves or rather their usraeli overlord made it for them.You may not like these simple facts but they are true nonetheless,get used to them,despite the best efforts of the usraelis iran is not isolated,indeed the very idea that you can isolate an energy superpower and the largest economy in the region is absurd