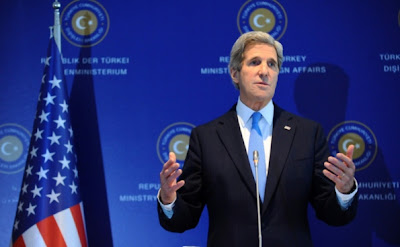 U.S. Secretary of State John Kerry today said in Istanbul that time is running out on nuclear negotiations between Iran and P5+1.

“This is not an endless process. ... You can't just talk for the sake of talking,” Kerry told a news conference in Istanbul. “It is our desire to have a diplomatic solution but this choice lies in the hands of the Iranians,” he added. (AFP, 7 April)

“Obviously there is an election and that complicates the choices with respect to the politics of Iran, and we are aware of that,” Kerry observed.
File photo: John Kerry in Turkey, 7 April 2013 (Getty Images)
Posted by Nader Uskowi at 11:20 PM

"diplomatic solution" = the Iranians must surrender and undergo regime change in the process.

This is similar to Germany's expectation of Britain in 1940, following the Battle of France.

If this were an honest diplomatic process, the matter could be settled in a matter of weeks, according to Flynt Leverett. He and his wife should know, they served on the National Security staff of the Bush administration. And Vali Nasr maintains a similar assessment, having served with the Obama administration.

Any neutral observer following this matter for years now can see through this, as well.

Mark why are you living in what you compare to Nazi Germany?

You better watch your lies or ICE may deport you to your economic paradise of iran. Then when you're crying and begging to come back to the U.S. you'll be in what I like to call a "rug salesman runs into reality" situation. Similar thing will happen to the iranian government and military soon when they have to confront hundreds of sorties per hour.

When you have the president and the suprem leader of the country making statements such as, we will wipe Israel off the map or we will make Israel into a field of dust, what do you expect from any administration??? Might I add, i'm no supporter of Israel as they have plenty of fault in the middle east, but come on man, you just can't make threats like that and expect the world to be ok with it.

If the west wants a deal its there for the taking,it just wont be on the wests terms thats all.This would be one of the only occasions were a quote from bush jr would be appropriate "bring it on" mr kerry,in truth the west can`t do jack sh#t and everyone knows it

@Mark the fanboy,Britain of 1940 was governed by English patriots.Iran of 2013 is "governed" by anti Iranian charlatans.It's completely idiotic to compare Britain of 1940 to Iran of 2013.And the most stupid thing to say is to compare NAZI Germany to US.Islamic fascist theocracy is worse than NAZI regime of Germany,barbarous,murderous,Zealot hateful regime.

Beware! The very first and the most important thing to do is; Iranians, and so do syrians, should not give up or to let themselves to be simply slipped, plunged and falled into the trickiest, dirtiest and bloodiest hands of the world's Zionist of the most evil nation of the so-called U.S., along with its lackey allies. Do free yourselves from being made puppets, lackeys and slaves, with which will be absolutely, finally put under full command, order and control of the world's puppeteer of the U.S.'s global domination. By just taking a closer look at the rest of those U.S.-dominated middle-eastern nations and countries, will understand what it is all about 'domination'.

dear doormat, the regimes of the Assads and the Ayatollah are so much more slimy than the worst of the Zionists. your comments are those of a blind donkey.

Time is running out to fix an "impotence" of the US from its lack of logic.

May be doctor Fazeli can take care of it.

Same old boring US/Zionist mantra for last 34 years. This is a magnified version of groundhog day since these impotent and hollow threats obviously have infinite duration. The US is a bankrupt deadbeat and the Zionist pup is just a bootlicker. NO WORRIES. LET TIME RUN OUT! LOL.

A political commentator tells Press TV that the United States tries to scapegoat Iran in order to avoid further humiliation over the case of North Korea.

The comments come as the new US Secretary of State John Kerry has again issued anti-Iranian statements against the peaceful nuclear energy program of the country during his Middle East tour.

Press TV has conducted an interview with Gordon Duff, senior editor of Veterans Today from Ohio to shed more light on the issue at hand. What follows is an approximate transcription of the interview.

SEE MORE ON: US tries to avoid humiliation over N. Korea case by targeting Iran:
Analyst

His complete speech (not mentioned here)starts by "all options are on the table"
for those of you above who have no clue what Mark is saying , this phrase transliterates into a direct military threat "we will invade your country "
Now who is the Hitler and who is the Chamberlain here?get a clue folks

no, I don't have any love for Zionism. I'm simply stating that the disgusting hereditary Assad dictatorship and the vile, murderous, perverse lying theocratic regime holding Iran in thrall are worse blights upon the world.

If you don`t support the axis of resistance then by definition you support the usraeli zionists and their arab stooges,its really that simple

When Kerry says that an option is on table, he should pay attention to the Chairman of Majlis commision, A. Boroujerdi who has said, that an OPTION TO WITHDRAW or suspend Iranian membership in the NPT is on the Majlis' table, as well.