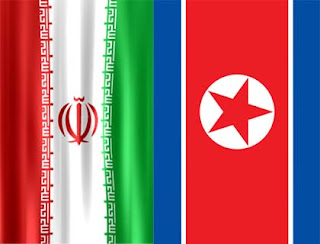 An oil deal with North Korea will bring the two countries closer together and will add to the volume of Iran’s exports that has been severely cut due to sanctions.
Posted by Nader Uskowi at 7:00 AM

You mean donating Iran's oil for free to North Korea.

Not only that, the Islamic Rapist Regime of Satan will sell the blood of innocent Iranian patriots and babies; they will feast on the meat of Iranian freedom fighters as they endlessly rape every single Iranian woman thanks to their fascist ideology of hatred and Sharia Law. They are destroying Iran brick by brick while they cackle in laughter, praying for America to attack them so they can destroy Iran once and for all!

There, I did your job for you. Now please leave.

who knows for what ;) maybe for something more interesting

IRAN's oil export to North Korea will only force the world's most arrogant, boastful and bully nation of the U.S. to do more louder 'barkings', militarily, against the great nation of IRAN with all those, merely well-known empty rethoric. What a pity one!

With a certinity, one can say that the cooperation between both countries can benefit Iran as well.

DPRK has got manufacturing lines for air defense systems, which among others include the production of the SA-17 air defense missile system, and in previous years DPRK developed new KN-06 air defense system with a parameters close to the Russian S-300 system.

In the past, DPRK helped Iran with alloy steels used in manufacturing of missiles and other components..

DPRK has also better expertise in development of launching vehicles (rockets) for satellites and space reaserch.

It is obvious that Iran can sell easily other products than oil to the DPRK...as well, maintaing its manufacturing lines busy.

At the last year NAM meeting, both countries declared that their cooperation will supplement needs of each of the two countries. It means that if one country has better expertise, achievements or resources over the other one, then it will be possible to share and exchange those assets...between them.

The West has no chances to expand its control over DPRK, or at least in the next couple decades to replace the DPRK's system with a Western one, so Iranian investments or loans should be safe.

Great news. DPRK is a strong ally of both China and Iran. Perhaps, more military and nuclear cooperation are in order. LONG LIVE BROTHER KIM.

Yeah just like your good friend america does for israel,it pays to help out ones allies were one can,a strong dprk is only to irans benefit,and I`ve no doubt iran will get something for it access to the dprks nuclear secrets or long range,irbm or icbm,missile tech

Nice that you live in the West like a little hypocrite and praise your "brother Kim". So why don't you mat and Mark Pyrus go and live in North Korea and enjoy the benefits of a fascist military Stalinist dictatorship.

Who lives in the "west" you moron?

Good for Iran!!! beyond donating oil to the NorKs they should send them a whole big bunch of food and maybe some of those plastic Keys to Paradise that Khomeini imported from South Korea.