IRIB Poll: Rafsanjani in the Lead 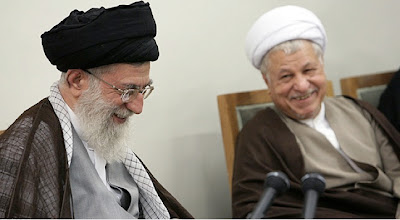 Rafsanjani represents the moderates within the current political system, the proponents of ‘reform from above,’ preferring a council of supreme leadership instead of a supreme leader, and massive economic reforms to limit the role of government in favor of private enterprise.
Khatami represents the reformists calling for a more open society and serious political, judicial reforms and press freedom. Qalibaf and Velayati represent traditional conservatives close to the supreme leader, Ayatollah Khamenei.

Rafsanjani and Khatami have yet declared their candidacies.

Aside from the three factions mentioned, there are also supporters of president Ahmadinejad as well as the extreme right grouping lead by Ayatollahs Mesbah Yazdi and Sadeq Larijani.  The president and neither of the two ayatollahs will be on the ballot, however. Ahmadinejad supporters prefer Mashaie to be their candidate, but are fearful that the Guardian Council might block his candidacy.  The extreme right will also choose a candidate among a short list of politicians to run for president.

Anybody that believes a word from this charlatan Rafsanjani or the rest of them must suffer from total amnesia or is an complete idiot.
This is just another game from the regime to trick the gullible with their clowns like Mashie aka Mr Bean look alike and the rest of their supposed "candidates".
Yek regime farib kar.

Here is a list of the candidates so far:

Note the number of reformists has increased, as well as independents. Like 2005, this will be an interesting election that will be difficult to predict.

Could not trust the election results 4 years ago, why believe the polls today?

It is always good to link to your reference.

Of course, this is a fraud being perpetrated by the above-mentioned blogger. There are no "conservatives", "reformists" and least of all "independents" in the IRI's so-called elections. Rather, there are different factions of the Khomeinist line (aka "Khatt-e Emam"). All non-Khomeinist political groupings have been executed, imprisoned or intimidated into silence by the Islamist terrorist regime. Furthermore, the most powerful political office in the land can NOT be popularly elected and can only be a Shia male cleric, who is for all intents and purposes the Leader for Life. BTW, any women "presidential" candidates? Even a single one?

I would seriously doubt a Rafsanjani or Khatami comeback. Both are relics from the past and a new generation of Iranian leaders has come to the fore. It will be an interesting election with a very high voter turnout. Iranian democracy has matured.

Oh yeah, velayet-e faqih is a democratic system. Sure it is!

Don't take Anon 2:48 too seriously because he is only a West residing IRI Groupie doing his duty in perpetuating the constant drivel on behalf of his paymasters :o)

Just shows the resilience of Iranian democracy and its pluralistic nature, unlike the US police state.

Ayatollah Sayyed Ali Khamenei has launched several pages on social media sites like Facebook, Twitter and Instagram, with daily updates advertising Iran's scientific achievements, political developments, social and foreign policy issues. Iranian leadership is increasingly in touch with Iran's net savvy public and is developing a mass following. Iranian population is also politically engaged and the leadership has found the social media as a popular avenue to connect with Iran's educated youth. There is vibrant dynamism in Iran's political scene as the Presidential elections approach on June 14, 2013.

Correction: the US fascist Zionist police state, which does not have the freedom of speech, religion, press, and assembly that the system of velayet-e faqih allows.

A system led by a cleric who is the Leader-for-Life. If that's not "vibrant dynamism", I don't know what is.

As of recently Mr. Aref (presidential candidate?), stated that there was no fraud in the 2009 election.

Zionist installed Congress and a brainwashing media backed up by GITMO and 24/7 Islamophobia is above par though.

"Islamophobia" is a meaningless term coined by Islamist terrorists and their Fellow Travelers.

Anon 7:10 AM...You're neither a good comedian nor a good liar.Perhaps you should stick to your rigorous medication.

Actually Islamophobia is a UN accepted term for the US and its Zionist masters pushing their insidious agenda of demonizing 2 Billion plus Muslims for all omissions and commissions. The fact is that now the US rednecks who already have a low IQ and are ignorant will be peddling more hate and no amount of arse-kissing the rednecks is going to make you immune from US racism and Islamophobia if you look "middle-eastern". Heck, even the poor Sikhs are regularly targeted in the United Snakes.LOL.

Now watch FOX/CNN peddle more paranoia and hate to turn the US into a fascist police state par excellence.

Would you mind if I copy-and-paste your comment and submit it to Psychiatry Departments throughout the world as a case study of schizophrenia and related delusional syndromes?

In which case, may I please borrow some of your Haldol?

Zionism is a sickness that can only be cured by surgical removal like lobotomy.