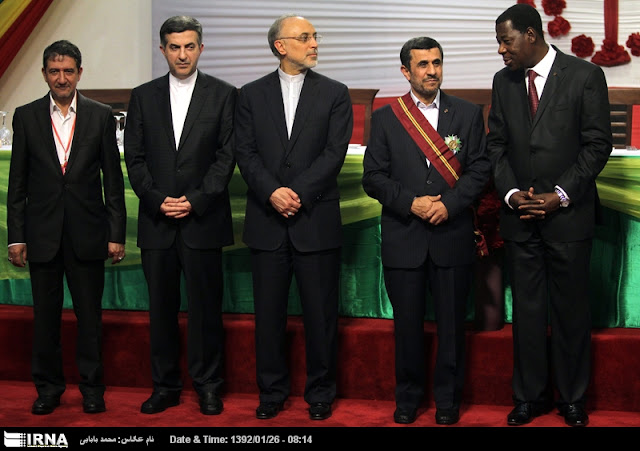 Iranian President Mahmoud Ahmadinejad wrapped up his daylong visit to Western African country of Benin, where he received the country’s highest civilian decoration, and headed to Niger. There he is expected to discuss direct import of uranium with the country’s officials. Niger is the world’s fourth largest producer of uranium, with the French nuclear group Areva having had a monopoly of production and sales of its uranium. (Reuters, 15 April)
Iran does have its own uranium mines, but could soon exhaust the reserves crucial to its nuclear program. After Niger, Ahmadinejad will visit Ghana before heading home to serve out his last two months as president.
Photo credit: Iranian President Mahmoud Ahmadinejad after receiving Benin’s highest decoration from President Yayi Boni. Also in picture is presidential hopeful Esfandiar Rahim Mashie, second from left. Porto Novo, People’s Democratic Republic of Benin; 14 April 2013 (Mohammad Babaie/IRNA)

Ha Ha Ha!! It looks like a freak show!

For the regime indoctrinated groupies just to prove to you all that the Islamic regime consists of nothing more than complete traitors to Iran.
Link....http//www.farsnews.com/newstext.php?nn=13911217000861

My boy Mahmoud is raking in frequent flyer miles and highest medals to boot! At least he is popular in Africa and when Mashaie loses he can get this medal as a consolation prize.

Iranian softpower is creating good ties with Africa. Iran has invested heavily in African trade and infrastructure and President Ahmadinejad has just announced the the construction work of a 25-megawatt power plant in the African state of Benin on Monday.
Iran's Power Plant Projects Management Company (MAPNA), one of the major general contractors of energy projects in Iran, is slated to complete Benin's power plant project in a period of about one year.

President Ahmadinejad, heading a high-ranking delegation, arrived in Benin Sunday on the first leg of his tri-nation tour of Africa which will later take him to Niger and Ghana.

Iran stands the 4th among the power-generating countries in the world and has integrated its electricity network into the power grids of seven neighboring countries, including Afghanistan, Pakistan, Iraq, Turkey, Armenia, Azerbaijan and Turkmenistan.

What's so freaky about this pic? ... Plain stupidity on your part.

"Plain stupidity on your part."