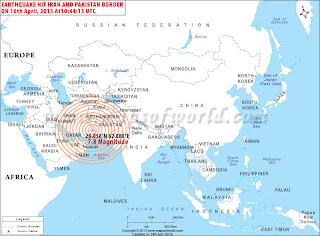 Today, shaking was felt from New Delhi to Dubai, and dozens of people have been killed by collapsed structures, mostly on the Pakistani side of the border with Iran. The massive quake hit sparsely populated areas, with Iran emerging relatively unscathed.

The Markan subduction zone has produced some of the Middle East's biggest and deadliest earthquakes. In November 1945, a magnitude-8.0 earthquake in Pakistan triggered a tsunami within the Gulf of Oman and the Arabian Sea, killing more than 4,000 people. USGS reports that today's quake was likely within the Arabian Plate itself, not along the zone where it meets the massive Eurasian Plate.

“We don't fully know yet, but instead of being slip along the slab, it was probably an earthquake within the slab,” said Bill Barnhart, a research geophysicist with the USGS in Denver. “This is related to the subducting slab flexing as it goes down deeper into the Earth.”
(OurAmazingPlanet/Live Sciences/Yahoo, 16 April)

Off the coast of Pakistan, at the mouth of the Persian Gulf, the Arabian Plate is sliding northward at about 37 millimeters (1.5 inches) per year. The motion pushes oceanic crust beneath the Eurasian Plate, which covers most of Europe and Asia, according to the USGS.

A smaller earthquake hit Iran on 9 April. The magnitude-6.3 Bushehr earthquake that hit in the southern Zagros Mountains, was unrelated to today's temblor, the USGS said. There the continental crust in Iran and Iraq, carried on the Arabian Plate, collides with the Eurasian Plate's continental crust. In 2003, some 26,000 people in Iran were killed by a 6.6-magnitude quake that flattened the historic city of Bam, located about 650 km (400 miles) east of Bushehr on the other side of the Zagros Mountains.

Fortunately this is a very sparsely populated area and there was minimal loss of life. RIP to all the victims in Pakistani-Balochistan. Iran is on the ever shifting Persian Gulf plate that has the most active seismic activity in the world. This 7.8 magnitude quake is one of the higher ones. Hopefully, Iran will enforce stronger building codes and enhance preparations for quakes. Iranian rescue and relief services are very good anyway.

Subduction-zone types are biggies. Ask me, I live in earthquake county.

Yes, San Andreas fault will awaken sooner or later too. California has been preparing for a long-time after the Frisco quake in 1906. I was at LAX in 1988 when the LA tremors hit, whole freeways just collapsed.