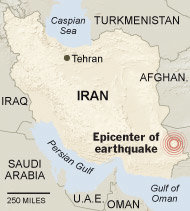 A powerful earthquake struck Iran near the border with Pakistan today, with hundreds of people feared dead. The epicenter of the 7.8-magnitutde quake was situated near the city of Khash, in Iranian Baluchistan. The tremor hit the area at 3:14 p.m. local time (10:44 GMT, 6:44 a.m. EST).

The quake’s 7.8 magnitude equals the Tabas earthquake in central Iran in 1978 as the country’s largest quake in modern times. It was so powerful that it was felt as far away as Karachi and New Delhi and in The Persian Gulf cities of Dubai and Bahrain.

UPDATE: The quake has hit sparsely populated areas, with Iran emerging relatively unscathed from it. Pakistan, however, bears the brunt of quake, although the epicenter was on the Iranian side of the border near the city of Khash. Pakistan reports at least 35 dead, many injured and hundreds of building collapsed in villages near the Iranian border.
UPDATE: Iranian authorities are still counting the cost of a powerful earthquake that hit Iran on Tuesday, with conflicting reports of the number of fatalities. Earlier in the day the semi-official Fars News Agency and state-run Press TV, referencing local officials, reported more than 40 deaths. Later, the government announced that there were no casualties. Fars took down its report, but Press TV’s report is still on its website.

MAY the Almighty shower the affected masses with mercy ! and may HE guard us all from calamities!!.