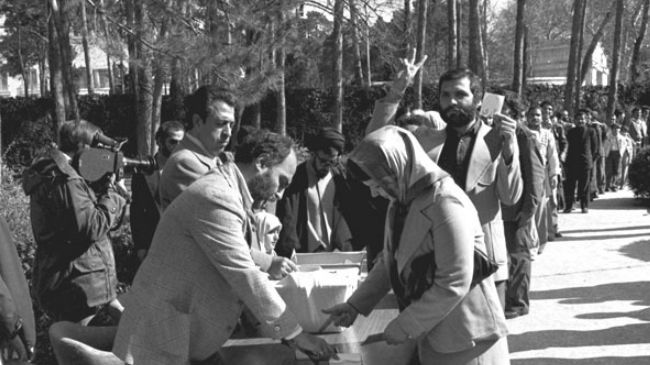 Iran commemorates the 34th anniversary of a referendum in which Iranians voted for the establishment of the Islamic Republic following the collapse of the Shah’s regime. In a two-day referendum held on 30-31 March 1979, Iranians overwhelmingly voted “yes” to establish an Islamic Republic.

Ayatollah Khomeini, the leader of the Iranian revolution, had famously said that a new generation of Iranians needed a referendum because the regime they had was not of their choosing but that of their parents and grandparents. Now after more than three decades after the referendum, a new generation of Iranians has come to replace their parents and grandparents. Is it the time then for a new referendum?

File photo: Overwhelming majority of Iranians voted in favor of the establishment of the Islamic Republic. March 1979 (IRNA)
Posted by Nader Uskowi at 8:30 AM

A day every Iranian should be proud of. It was indeed the world's LAST GREAT REVOLUTION and a testament to the wishes and aspirations of the great Iranian people. Iran Payendebad.

Now a celebration, over a couple of years/decades the most black day in Iran's history.

Indeed, without the victory of the 1979 Islamic Revolution that see the ousting of the U.S.'s closest puppet ally, the Shah of IRAN, the people and nation of IRAN will still in the tight grip of the world's Zionists of the U.S. and its lackey allies of the West up to till today. Therefore, since this unforgettable historic great event, the whole nation of IRAN have been freeing themselves for 34 long years from the iron grip of those foreigns' controls and orders. Eventhough it is a bit tough to live under the current iranian leaderships, it is rather much far better than under the so-called New World Order of the U.S.'s.

Proud? Every Iranian? Why? Because bad was changed to worse? Triple your medication, hold your head under cold water, go and visit some friends in Evin, enjoy the high prices for food and daily life and keep on dreaming...

Countries don't hold referendums on their constitutions every 30 years. The closest thing to that for Iran was that poll conducted after the 2009 election by a U.S. polling agency that showed slightly over 90 percent responding in varying degrees of favor toward their form of governance (Islamic plus participatory). Interestingly enough, that form (Islamic plus participatory) is also what majority Arab populations prefer, coming out of the "Arab Spring", which is characterized by Khamenei as an "Islamic Awakening".

Oh Yeah.. Our Parents actually did Vote for this... Well everyone makes mistakes.

I don’t believe that the Iranian leaders pay much attention to such polls, the might use this particular poll for propaganda purposes, but they don’t bet their house on its accuracy. Just imagine, a U.S. polling organization unexpectedly calling households in Iran from outside the country asking if they favor their regime: and you expected to get anything less than 90%!

I didn’t call for a referendum. The question was asked as an observation to what Khomeini had said. Based on his rationale, we need to have a referendum just about now. But I guess he was only saying this at the time to justify holding of a referendum to legalize the establishment of the Islamic Republic. BTW, I voted yes on that day, 34 years ago.

Mark could you adduce a source which actually backs up your claim that 90% of the Iranian people support the present regime?

April Fools Day.The Fools who thought that Khomeini and his gangsters were "liberators".

Mark is the fanboy of the regime.Don't expect anything less from him.

Without the "victory" of the 1979 Hezbollah Palestinian takeover of Iran through deception and false promises,low life scumbags and hangers on of the turdocracy wouldn't be garnishing these pages with lies and drivel.

Anon 9:14 you call that a revolution? What type of revolution is it that goes backwards?
A day that every Iranian should reflect upon itself and ask themselves why they allowed the keys to a bunch of moft khors and benamoos to ransack the country.

FINAL WORD: The Iranian revolution is enduring with over 90% support and here to stay so some of the perpetual whiners need to get over it and get a life. IRAN PAYENDEBAD.

You can't just take 90% out of your ass and claim it as "FINAL WORD".
It's "enduring" because the regime is using wall to wall basij and thuggery.
The "FINAL WORD" is that regimes that use brute force end up in the dustbin of history.