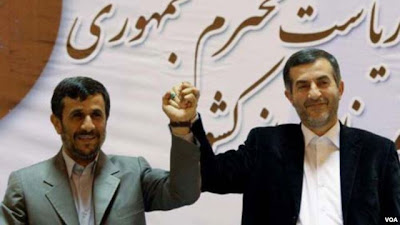 To honor the country’s cultural heritage and tourism organization, President Ahmadinejad is a throwing a big party on 15 April at Tehran’s Azadi Stadium, the capital’s largest outdoor venue used for major soccer matches that can seat more than 100,000 people. The gathering is said to be an “extravaganza”, “more glorious” than previous years, with traditional music bands performing at the event.

But the goal this year, two months prior to the upcoming presidential election, is widely believed to be the launch of the candidacy of Esfandia Rahim Mashaie, albeit informally, to replace Ahmadinejad as the next president of Iran. Both Ahmadinejad and Mashaie are expected to speak at the event.

“Zendeh Bad Bahar” (“Viva Spring”) will be the slogan for the event. It’s been used in recent months as the signature campaign slogan in pro-Ahmadinaejad/Mashaie rallies. The right, who accuses Mashaie of being the leader of the “deviationsts” for his perceived preference of the nationalist Iranian character of the country at the expense of Islam, cringes at such slogan and the Iranian-flag waving crowd that attend such events.

The conservatives will try to stop Mashaie’s run for presidency through the Guardian Council, a 12-member body consisting of clerics and Islamic jurists, with half of its members appointed by the supreme leader and the other half selected by the conservative majority in the Majlis. Ironically if they are successful in rejecting Mashaie’s candidacy, they will open the door for the victory of the candidate of the moderates/reformists.

In every country the political Right represent (supposedly) the patriots of that country exept in Iran where 'political Right' represent the anti-patriots; that is how you see that the country is occupied by an alien force ...

Since the majority of so-called bloggers who post here would not know a factual thing about Iran even if it bit them on their ignoramus arse, it may be helpful for the adults to read the whole list of Presidential hopefuls:

11. Gholam-Ali Hadad-Adel: Member of parliament and former speaker of the parliament (Seventh parliament, 2004-2008)

15. Mohammad Saeedi-Kia: Minister of housing and urban development who holds the distinction of having served in nearly every presidential cabinet since the Islamic Revolution of 1979

20. Mohammad-Reza Aref: Former vice president (Khatami administration), he has stated that he will step aside if Khatami formally enters the presidential election

21. Mohammad Shariatmadari: Former minister of commerce (Khatami administration), he has stated that he will step aside if either former presidents Khatami or Hashemi-Rafsanjani formally enter the presidential election

Nader, this source says that Ahmadinejad is going on a three-days trip to Africa on Sunday. That would mean that this rally is not going to be held?

Any women "candidates"? I thought half the population was of the female persuasion. Any who are not devotees of Khomeini and his line of "thinking"? And the Supreme Leader, does he stand for election by the people every few years? Is criticism of His Excellency permitted? And what about freedom of speech, press, assembly, and religion?

All I see is a list of bearded monkeys :o)

Yes, I just saw the announcement of the trip. Interesting the news of the rally and Ahmadinejad's participation had come from the director of heritage and tourism organization. we have to check to see if the rally is postponed.

All the candidates, as I have tried to explain the Iranian internal political dynamics many times before, come from the ideology of the Islamic Revolution of 1979. However, their interpretation of the Islamic ideology may differ, they mostly fall in a few broad categories and all have to operate within the IRI constitution and election guidelines as in every country.

At this stage there are no nominations for a female candidate or even heavy-hitters like Ali Larajani, Khatami.

Besides the elections vetting process, a number of other factors may influence the final field of candidates. First, each political faction will eventually make a strategic decision to back what it perceives to be its most viable candidate in a narrowing field, leading most of the others to drop out of the race on their own accord if they perceive they have no chance of winning. Second, various political currents may engage in coalition building, as the Neo-Principalists and Ahmadinejad-Mashaei factions appear to have done in the 2005 presidential election when they both threw their support behind Mahmoud Ahmadinejad. Such coalition politics may happen again, particularly if there is a run-off election in which only the top two candidates from the first round of voting make it through, and would lead to a ‘super candidate’ backed by multiple political currents.

Interestingly, Ahmadinejad's Abadgaran in 2005 operated Under the slogan "Us and You!" Abadgaran's slate of doctors, engineers and economists — a number of them educated in Britain and the U.S. — presented a people's-party-image focused on addressing the everyday problems of Iranians. Still, there is no doubting the Abadgaran's revolutionary credentials, nor its conservative leaning. The Abadgaran's foreign policy maxim is, "Honor, Wisdom, Prudence," They also shun any improvement of relations with the Great Satan US, as "Relations with the U.S. are not as important as our prayers, nor as sinful as alcohol," and as Abadgaran leadership explains "For more than half a century, the American government has been oppressing us, so, unless they change their attitude, there's no basis for rapprochement."

In terms of your other points, I will try to explain in my usual objective manner without the anti-Iran diatribes that are the norm on these blogs. As in past presidential elections the current field of candidates may continue to expand somewhat, but in the coming few weeks will quickly whittle down to a handful of leading candidates who meet the Guardian Council’s strict vetting standards and nationalist credentials. On your other point, criticism of Sayyed Ali Khamenei (Rahbar-Suprme Leader) is rather moot as he is not standing in the elections and power in Iran is most diverse and diffuse than most realize. No state allows sedition and muck-raking anyway and Iran's laws are similar to any democracy.

If yo can read Farsi media, then you know that there is already a very vibrant and open political campaign underway and there is no bar on discussing nay issue, however undermining the state or treason is not allowed, which most Iranians are not interested in any way. This will be a very inclusive landmark election and perhaps, one of the most closely contested election in the Islamic Republic’s history.

Yes, it is not only that they are a religious dictatorship; on top of that they hate anything Iranian ...

The rally is postponed to Thursday 18 April.

Typical Islamist dishonesty at its finest. Here are just a few samples:

"Guardian Council’s strict vetting standards and nationalist credentials". By which you mean Khomeinist Islamist credentials. Are any other political orientations, nationalist or otherwise, other than "Khatt-e Emam" allowed? Moreover, the regime has barred females (i.e. half the population) from standing as "presidential candidates" (not to mention, Supreme Leader, any level of judge whatsoever, etc).

"On your other point, criticism of Sayyed Ali Khamenei (Rahbar-Suprme Leader) is rather moot as he is not standing in the elections" That doesn't answer the question of whether criticism of His Excellency is allowed at any time or place. Nice try, though! This is a regime that does not allow freedom of speech, press, religion or assembly. Some "democracy". Ha!

Better then the Zionist controlled US Congress of corrupt millionaires backed up by a brutal GITMO police state ..eh?

Yes,they hate everything got to do with pre-Islamic Iranian history and are trying to shovel down our throats their hatred and bigotry.Ideology of any form is the worst type of governance.

He is most likely living in LA,Toronto or London :o)