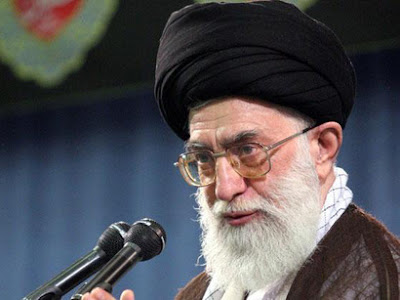 Iran’s Supreme Leader Ayatollah Ali Khamenei said today in Tehran that the country’s next president should take heed of the principles of the “economy of resistance.” The term is used by the leadership in Iran to convey the urgency of circumventing the sanctions.

Khamenei also said the president should be resilient and prudent, and have a long-term approach toward economic issues, relying on expert opinions in his decisions. (Khabaronline News, 27 April)

Iranians will go to the polls on 14 June to select the successor of the current president, Mahmoud Ahmadinejad. The Guardian Council, a conservative body with half its members appointed by Khamenei, vets the qualifications of the candidates to ensure their views do not differentiate much with those of the ruling orthodoxy in the country. Khamenei can also veto the Council’s decisions.

Iran should be running its huge economy on war-footing anyway and devote more to defence as US/Zionist barking will continue until evil Zionism destroys the decaying US corpse with endless lost wars as the deadbeat US economy continues to implode.

After all these years I still get amazed on how much empty slogans with no relation to the post can a commentator pack in his/her “comments.” I guess they just copy and paste from any of their previous comments on any post on any blog. As long as of course it contains key words like Zionism, deadbeat US economy, etc.

The expression of “economy of resistance” should mean the country is under serious pressure from the sanctions and the government needs to be careful on what and how much they spend. Don’t read much more into it!

Code for more of the same nonsense.

Since you live in the US and have never been to Iran, I suggest that you open your eyes and pay more attention to the failing US deadbeat economy. People should not live in Disneyworld for ever.

Familiar tactic: attacking the messenger for wrong reasons and say nothing about the message. I told you what I think the term “economy of resistance” means. But you make some nonsense assumptions about my personal travels and places of residence. But what is your understanding of the term? That's the topic of discussion. Or is it that you are not interested in discussions, just wanting or having the mission to launch personal attacks?

Anon8:43 PM.....I don't need to defend Uskowi because he is capable of doing so.But he was born in Iran and was there during the so called "revolution". Where were you during that time? Are you even Iranian or are you one of those Super Ommatie types that believes all the codswallop it's fed?