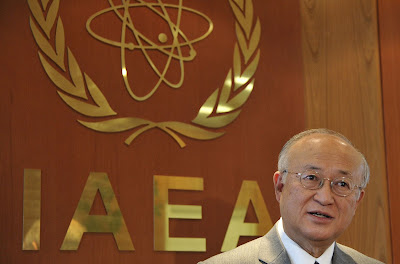 The IAEA Director Yukia Amano told the Associated Press on Tuesday that Iran may be secretly continuing work on nuclear weapons while his agency is tied up in protracted negotiations with the country on restarting an investigation into past suspected research and development of such arms.

Iran denies any secret weapons work, and a U.S. National Intelligence Estimates made public in 2007 said Tehran had suspended weapons development in 2003. Since then, however, IAEA reports have listed suspicions of tests and experiments past that date.  “We do not know for sure, but we have information indicating that Iran was engaged in activities relevant to the development of nuclear explosive devices in the past and now,” Amano said. (AP, 3 April)

Amano added the IAEA's information was “cross checked ... so we have concerns.”

Yousaf Butt, a nuclear scientist at Monterey Institute of International Studies and a critic of the IAEA, said in response to Amano’s latest comments that Tehran “should be presented with any such evidence so it can respond to it.” (AP, 3 April)

Amano also said there was “some possibility” that Iran may already be constructing additional sites to enrich uranium at locations unknown to the agency, based on an announcement by Tehran that they plan to build around 10 such additional facilities.

What Amano does is irresponsible; if he has evidence he has to show them; speculating out of his imagination -otherwise - shows only that he has crossed the border of insanity ...

I think you will kill in future so you are guilty... No evidence, No Logic, Only irresponsible guesses?

I think Iran is secretly working with Alpha Centuri Aliens, Why you ask? Because Iranians have not prove otherwise.

The very first of all just before any 'undisputably, with the intention's false accusation' be simply throwed against the most sovereign state of IRAN, the Zionists of the U.S., Israel, the West and lackey allies-backed and controlled-IAEA, the soy bean shaped-face of 'Amano the puppet and stooge', should first, at least, learn and fully understand the actual meaning of the term 'One is innocent until proven guilty' if not of the 'aerial atomic bombings of Nagasaki and Hiroshima of Japan during the 2nd World War back in 1945 by the world's most devil state of the ...... What a poor, embarrass and ugly japanese of the modern world!

Instead of all the anger and racism shown in the comments so far, try to reason why the IAEA chief is wrong. Should he first give Iran a chance to respond to information he’s received from power powers before making his concerns public? Is the information he’s received not accurate? Is Iran not a type of state who builds the bomb due to religious principles? Is Iran not a type of state to keep any new enrichment facilities secret? Try to discuss such issues and in the meantime contribute to the conversation here.

Oh Please...It must be clear after so many years of fear mongering that "I say nu-cle-ar, Bush says Nu-cu-lar" issue is just another tool to put pressure on Iran. Even if Iran is looking to make one, What is Iran going to do when Israel has hundreds of them? Suicide? Not even the craziest of regime leaders (and they have a few) like the idea of suicide.

Mr.Uskowi, If he has any concrete evidence he should bring them to IAEA attention where he is the chief. If he is speculating then he acts like a stupid amateur journalist while sitting in IAEA chief chair and his words has a certain weight. Either way, he should give these sort of interview and should just show the evidence that he has to the board. IAEA should be really impartial and just use the real evidence otherwise it become nonsense

If you mean he should have brought the evidence to the attention of Iran and give them a chance to comment on them, I agree. I can only imagine that the IAEA team responsible for Iran nuclear program has access to the information.

I actually mean he should bring the evidence to IAEA board or UN security consul and of course should let Iran to comment on them. But instead he is just propagating unproven charges against Iran. It is not his job and is very irresponsible. It seems he is a just puppet rather than an independent expert.
As far as we know, IAEA officially does not have any such evidences. If Amano have them and they are concrete and presentable he should present them to official investigators otherwise he should shut up.

sorry fanboys, but Iran's regime has lied and hidden things too many times and has allowed things to reach the point that the onus is on Iran to demonstrate their good intentions rather than expect to only have to respond to publicly produced evidence.

Could you give me an example of when the regime lied and hid things? Also, would you not consider Iran accepting Additional Protocols for two years - with nothing in return - as a sign of good intentions? How about acceptance of Turkey-Brazil-Iran nuclear fuel swap?

THE MAN has no evidence! He is the same Amano we have known all along.the intelligence he has is IRAN'S breakthrough recently announced about nuclear fuel!!.

This is highly unprofessional behavior for the head of the iaea and one more black mark on mr amanos already tattered reputation,what we need is a blix or el baradei instead we get a japanese richard butler,all that the americans have achieved by putting this lying little toady in place has been to damage the credibility of the iaea but sadly they could seen to care less.I think that as long as this biased and untrustworthy individual is in place iran should restrict its cooperation with the iaea to the barest minimum permitted and should be lobbying hard behind the scenes to have this disreputable fellow removed and replaced by someone unbiased

the burden of proof is not on the accuser once the jury has reached a verdict.

Iran has been found not to be in compliance and has been sentenced to sanctions
and if iran wants the penalties removed and further penalties not applied, it's up to iran to convince the world

I hane no knowledge of the interworking of the IAEA. When the director general says he has concerns based on information received and cross checked, you assume there is mor ethan one source involved, and more importantly you assume that the senior officers within the agency and/or the board have accost to it. Again, I don't know how they classify these sorts of information internally. But all aside, Iran should be given the opportunity to comment on the intelligence.

wrong again genius the sanctions were politically motivated in a failed attempt to try and stop iranian enrichment,iran is in full compliance with its npt obligations.You really should try and properly educate yourself on the facts before posting here otherwise go back to militaryphotos.net or strategypage,I hear ignorance is a prerequisite for posting there

laughable bilge. the Security Council, the IAEA the EU, China, Russia and all the others are all in a political conspiracy against the poor misunderstood Khomeinist creeps you claim.

and then even more stupidly, tell me to get an education.


you've a head filled with rocks and slurry.

Sadly when it came to iranian control of the fuel cycle there was an attempt by the west to try and bully iran into giving up its npt rights,this was less a conspiracy and more typical western hypocrisy ie one law for me another law for you,the russians and the chinese no doubt exacted a very high price from the west to go along with it.Ultimately the biggest losers in this foolish game have been the europeans who have thrown away economic relationships that took decades to build and at a time when they badly needed the billions of euros of trade and energy that iran supplied.Perhaps when you educate yourself you will no longer be ignorant of the facts of irans nuclear program.Your problem seems to be with irans government I get the feeling that if the shah was still running things you would have no problem with irans nuclear program

For the head of the iaea to be publicly making claims like this without supplying a shred of proof is at the very least highly unprofessional and at worst calls into question the impartiality of himself and the iaea.

Right, because the Security Council, IAEA and EU have never been wrong about WMDs... *cough* Iraq *cough*. Appealing to authority is not a good thing.