Kayhan, Other Media Warn of Public Backlash Over New Wave of Price Hikes 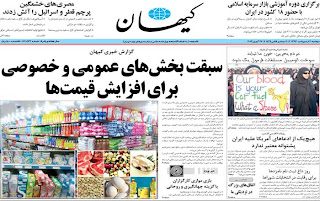 The media have also been critical of officials in handling the country’s economy in face of sanctions. Kayhan generally supports the official policies.

Prices of staples such as cooking oil, chicken and red meat have jumped up to 60 percent in recent days after authorities increased the special exchange rate for importers. Food importers now pay 24,500 rials for $1, nearly double from the special 12,260 rate they paid before.

Time for ahmadi nejad government to go.
he has failed totaly to controll the inflation.

and ofcourse you can forget the clown Meschai for president,

It's time for the regime to go.
The rest are just their clowns.

As long as the "to go" part is peaceful Most people in Iran are for it...They see Iraq, Afghanistan, Syria, Libya... and they know better.

Back in the early 1940s when the British faced an active, continental hegemon, prices for the above listed "staples" were even higher and tightly rationed. We've yet to see rationing or a suspension of national elections, as happened in Britain.

With such prices taking effect in Iran this appears to be a real opportunity for domestic industries, in filling the need with ramped up production.

Your pathetic attempts to compare a patriotic government of war time Britain to a anti Iran regime is beyond stupidity.

No, It's not stupid. The government does not need to be efficient, popular, or for that matter democratic in times of hardship to do whatever necessary to survive, the will to survive is very strong and primary among human specie. Stalin's government, one of the worst in history, used that drive to do an amazing job in WWII.

Do not be naive: Mark Pyrus is advocating the US-policy on Iran - badly masked under the pro-regime propaganda ...

horsesnot. Stalin's gov't would have failed and the Germans taken Russia were it not for the US aid to Stalin and the knowledge of the Germans that they had to hurry things because the US was going to deploy in Europe.

Mark Pyruz shows his great "level of knowledge" of history !!! when he compares WWII GB and the Geopolitics of that conflict with the current political situation in Iran.

Were these the "suspended" national elections that Winston Churchill lost (in a free, fair, and open way) to Clement Attlee during the greatest armed conflict in human history?

Do you really believe these people will leave peacefully?

Most WWII military historians do not agree with you. The German Losses in Eastern front between 1942 and 1944 where large parts of Wehrmacht was basically evaporated is very well documented. The entrance of Western allies in Western Europe was well after German Army was in full retreat after loosing so much in East. The US help to Soviets at the time as far as material is also well documented to be less than 10% of all military equipment produced and used by the Red Army.