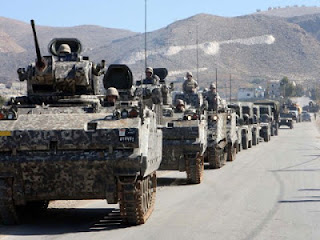 Syria’s opposition chief urged President Bashar al-Assad on Monday to respond positively to a call for dialogue and to delegate his deputy to end 22 months of warfare that has cost tens of thousands of lives.

“Since the start of the crisis, Mr Sharaa (Assad’s Vie President) has seen that things are not going in the right direction,” said Ahmed Moaz al-Khatib, the leader of Syrian opposition. “If the regime accepts the idea, I ask it to delegate Faruq al-Sharaa for us to hold discussions with him.”
“The regime needs to take a clear position. We will extend our hands for the sake of the people, and in order to help the regime leave in peace.” (AP, 5 February)

Photo: The Nation
Posted by Nader Uskowi at 9:16 PM

Email ThisBlogThis!Share to TwitterShare to FacebookShare to Pinterest
Labels: Syria

That is a nonsense, Mr Khatib is trying to get recognition, when he has no influence over the majority of that include terrorists and "independent" rebels.

The Uskowi's article again omits important part of Khatib's proposal, that the negotiations will have to, among other things, deal with a "peaceful departure of the (Assad's) regime "....

I have tried to read the full article according to the last sentence's instruction and I attempted to "click here" and no any extension of the article had appeared.

Not exactly in "Assad's Court", Nader.

This is a diktat: take it or leave or leave it.

The Assad side has always been open to negotiation. The armed opposition, with the West's prodding, has always been about Assad backing out, rendering the "resistance camp" greatly diminished.

This is the conflict in a nutshell.

It seems there are three main parts to resolution of this conflict emerging among the Syrians: The departure of jihadists from the scene, the willingness of the National Coalition to enter into a national dialogue with all parties, including the ruling party, to set up some form of constituency assembly and national referendum to define its future political structure and rebuild the country, and a national consensus on the role of Assad, such as a compromise like him remaining as president for a specific time but not overseeing or participating in the elections. The Syrians should make the decisions, but they don’t have the luxury of time. Already 60,000 dead and unfortunately many more expected to die every day. This national and human tragedy needs to come to an end, and soon.

Sorry the link was not functioning. The AP story is distributed widely, and I will try to get you the link.

Here's a link to the AP story: http://news.yahoo.com/syrian-opposition-chief-renews-dialogue-offer-144236608.html

The role of Assad and his regime is to step down.

ALL cool heads had predicted that it was impossible to force a regime change in SYRIA by the barrel of the gun.THERE WAS no way Iran and Hezbollah would allow it.NOW SYRIAN RATS HAVE LEARNED this a bit too late in the day.let us all hope all the parties will come on the negotiation table with sincerity and honesty!!.