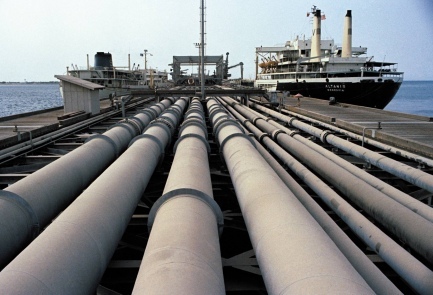 Iranian government today released the projection for the volume of oil export and revenues in the new Iranian calendar year 1392, beginning 20 March. Iran’s oil exports is estimated to be an average of 840,000 barrels a day, a drop of 1.8 million b/d in less than a year. Oil export’s annual revenues are predicted to be $31 billion, a drop of $20 billion over the same period this year and a drop of more than $60 billion compared to the revenues last year. (Tabnak, 28 February)

UPDATE: The estimates quoted by Tabnak and reported above were part of government’s budget proposal for the new Iranian calendar year of 1392 (starting 20 March) that was presented to Majlis on Wednesday and reported by the country’s official news agency.
Posted by Nader Uskowi at 10:08 PM

and considering that Iran's projections can usually be counted upon to be well on the optimistic side, this is gonna be tough.

Holy mackerel, Iran was cashing in ALOT of "dough" before the oil related sanctions went into effect. How much foreign reserve did they amass during all these years? Does anybody have any kind of figure? I read somewhere that they earned upwards to 110 Billion $$$ last year or the year before that.

If these figures are correct (they're being reported by media representative of a certain presidential candidate for the June 2013 election), even so they're at levels attained during the first half of the 00s, which is sustainable.

What is sustainable is the destruction of Iran - so you are enforcing the policy of USA on Iran anyway - in the Name of resistance to it (lol); but in some sense that is a good sign meaning that Anti-Americanism has become meaningsless in Iran ...

Simply put, normalization of relations between Iran and the United States would deprive Khamenei and the deeply invested cohort of radical ideologues around him of a powerful justification for their arbitrary rule.
...
The implementation of an unprecedented regime of economic and political sanctions against Iran has been a godsend to Khamenei, because it presents him with a tangible set of grievances against American "arrogance" and "hypocrisy."

It is notsustainable today, when you have an expensive Nuclear project to run, Very high corruption rates (the 1000 family that want to steal as much as they can) give a few billion to Syria and Hamas and Hezbollah, finish all the half finished projects that you keep sending on this site, paying your basiji shock troops, keeping the families of all the Martyrs happy, etc....

Wow! Look how "mighty" the Islamic republic is.

A new nationwide opinion poll indicates that a majority of the people in the United States say China is the leading economic power in the world today.

The annual World Affairs poll, conducted by Gallup on February 7-10, was based on nationwide telephone interviews with 1,015 American adults. Its results were released on February 26, 2013.

The results showed that 53 percent of participants rate China as the leading economic power, continuing the trend for a third consecutive year.

The poll also pointed out that only 32 percent of Americans believe the United States is the leading economic power, with 8 percent saying Japan is the leading power, and 2 percent each saying the European Union, India, or Russia.

There are some reports that the West even accepted Iran enriching 20% for small amounts it Needs; now why does Khamenei still refuse the deal?

If that's the case,why don't you emigrate to China and enjoy their democracy and human rights matey boy?

Please give us links to these reports.

Sanctions-battered Iran's oil production has fallen to its lowest level in 23 years and Tehran plans to reduce the proportion of oil revenues in the next budget, international energy monitors say.

But analysts say that even if U.S. and EU sanctions, imposed in 2010 over Iran's refusal to abandon key elements of nuclear program, were lifted in the coming weeks Iranian oil output already faces long-term decline.

"Until 2011, Iran was the third largest oil exporter in the world, after Saudi Arabia and Russia," Oxford Analytica observed in a Feb. 25 analysis.

Over the last year, the International Energy Agency, the West's energy watchdog, says Iran's output has fallen more than 1 million barrels per day, underlining the efficacy of the sanctions. In fourth quarter 2012, it was pegged at 2.6 million bpd.

Iran's unlikely to achieve near the level of foreign investment or technology it needs to revive its long-neglected energy industry. The sanctions aimed at blocking the flow of capital and advanced drilling technology are making it ever harder for Tehran to arrest the production decline of its oil and gas fields.

"What you're seeing is not so much the lack of money but the lack of technology and the loss of international partnerships that have had such a major effect on Iranian output," said a former government official.

"That goes for both oil and gas."

Despite all this, Iran still has major energy reserves, with proven oil reserves of 137 billion barrels, around 9.3 percent of the global total and 12 percent of OPEC reserves.

Most of the oil reserves held by the National Iranian Oil Co. are confined to six super giant fields, which face relatively high depletion rates of up to 13 percent and a low recovery rate.

"To slow this decline, Iran is in dire need of foreign direct investment," Oxford Analytica noted. "However, successive rounds of sanctions and its own onerous contractual terms have caused significant capital flights.

"Iran's own efforts to invest in upstream production -- $25 billion since March 2012 -- have failed to forestall its eroding capacity."

Iran also has the world's second largest natural gas reserves, after Russia, of 1,116 trillion cubic feet, most of it offshore in the Persian Gulf. But these remain largely under-developed.

The Middle East Economic Digest reports: "The number of international oil companies that have pulled out of the upstream sector has increased and is no longer confined to the large Western oil majors such as Total, Shell and Statoil.

"It now includes the Asian players that were considered more bankable partners by Tehran: Malaysia's Petronas and Amona, the Indian Oil Corp. and Oil India, Japan's Inpex and, most recently, CNPC of China."

MEED said $14 billion had been allocated to the National Development Fund for NIOC for oil and gas development.

"Somewhat optimistically, NIOC had wanted to tap foreign investment to support its fifth development plan, for 2009-14, for development and exploration activities, with a projected spend of $155 billion," the weekly reported.

"Little of that has been forthcoming and the reality is that sanctions are affecting exploration and production efforts."

Oxford Analytica noted, "Even in the unlikely event of a swift resolution to the nuclear dispute, Iran faces long-term damage to its oil reservoirs."