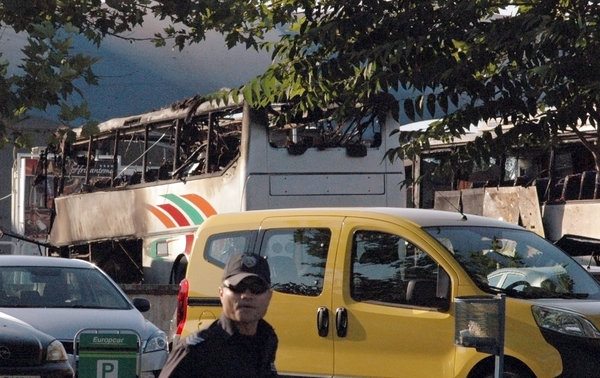 Bulgaria’s Interior Minister Tsvetan Tsvetanov announced in Sofia today that two of the people behind the 18 July bombing which killed five Israeli tourists, a Bulgarian bus driver and the bomber, were believed to be members of the military wing of Hezbollah. (The New York times, 5 February)

Bulgarian investigators reportedly identified two of the plotters as a man with an Australian passport of Lebanese descent, believed to be the bomber, and a man with a Canadian passport. Both of the suspects lived in Lebanon.
Hezbollah has denied responsibility for the bombing. After the attack, Israel immediately blamed Hezbollah and Iran. The New York Times reports that the U.S. officials privately supported that view, based on intercepted communications.
European Union’s joint law enforcement agency, Europol, found that the attack had not been a suicide bombing, and the device had been remotely detonated. The fake Michigan driver’s license recovered at the scene had come from Lebanon, Europol said.
Photo credit: Bulgaria's Burgas airport on 18 July after an explosion on a bus carrying Israeli tourists outside the airport. (Reuters/NYTimes)
Posted by Nader Uskowi at 10:26 PM

Obviously, if the Bulgarians insist on relying on the evidence, they're enemies of Islam and should all be hanged as being among those who spread corruption on Earth.

Another load of nonsense and ZIONIST anti HEZBOLLAH PROPAGANDA onslaught ! didn't they implicate Iran on this issue? and now they are settling on Hezbollah!.shameless liars!!.

There were Israelis killed; or do you dispute that fact? Did they commit suicide or were the victims of a terrorist attack? Who could have done that attack? Especially knowing that the Israeli government was involved in the assassinations of the Iranian nuclear scientist. So at least there were reasons to suspect the types of Hezbollah The Bulgarians say they've pinpoint the case. We should not take their findings at face value and hope a court would hear the case soon.

Also hope Israelis stop the cycle here and do not retaliate against Hezbollah or Iran.

USKOWI!-
-well said sir and how i wish you personally led that investigative team with your innocent hands and untainted mind!but we are dealing with a case that the ISRAELIS have an interest in and it is everybody's guess that they were party to the team that did the investigation!.But the nasty part of this case is conclusions that Israel ARRIVED, ACCUSING IRAN in one of the most spectacular ISRAELI shamelessness! and which led to a diplomatic tongue wagging!! .SO the million dollar question is

@-why did not Israel wait for the Bulgarian Police investigation team to come up with its own independent conclusion ?

@-and then we have to look IT with open eyes 'an HEZBOLLAH terrorist operation in Europe ' expertly executed, leaving behind no finger prints!!.-seems too tall an order for Hezbollah to climb!!.

For your answer Mr Uskowi B.M.A bases his facts on Islamic nonsensical zealotry.