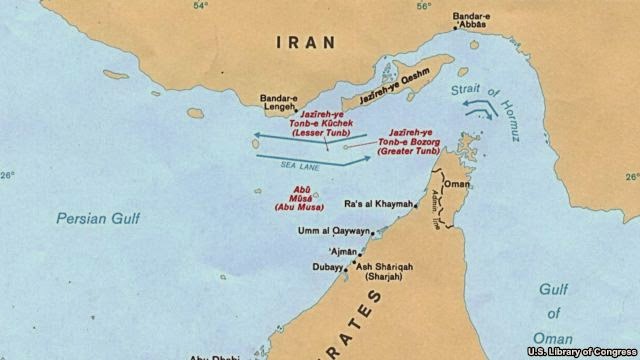 The United Arab Emirates today launched a complaint with the UN against Iran, saying Iran has raised its national flag over the island of Abu Musa that belongs to UAE. The Emiratis believe that under a memorandum of understanding signed in 1971 with Iran, the island should be under UAE’s administration.

“The Government of the United Arab Emirates strongly protests against that step, which it considers to be a flagrant violation of the memorandum of understanding (MOU) that does not affect the legal status of the island,” UAE Ambassador to the UN Lana Zaki Nusseibeh wrote in a letter to the UN Secretary-General Ban Ki-moon on Monday.
The UAE “stresses that the 1971 memorandum of understanding did not transfer sovereignty over the island of Abu Musa or any part thereof to the Islamic Republic of Iran,” the UAE complaint said. Adding that since 1980, Iran has taken measures on the island that “violate the MOU with a view to bringing the island under Iranian sovereignty… The Government of the United Arab Emirates hereby calls on the Islamic Republic of Iran to rescind those measures, immediately remove the Iranian flag and comply scrupulously with the 1971 memorandum of understanding,” Ambassador Nusseibeh said in her letter.

Iran rejects UAE’s claims over the three islands of Abu Musa and Greater and Lesser Tunbs in the Persian Gulf. In 1971, the Shah’s government agreed with the departing British to take over the three islands in return for dropping its historical claim over Bahrain. Today, Iran said UAE’s complaint about raising the flag over Abu Musa is interference in internal affairs of Iran.

Hossein Dehghani, Iranian Charge d'Affaires at the UN, wrote to the secretary general that Iran has “full sovereignty” over the three islands, adding that measures undertaken there by Iran have “always been conducted on the basis of the principles of the sovereignty and territorial integrity of the Islamic Republic of Iran.”

“It is obvious that the territorial integrity and sovereignty of the Islamic Republic of Iran over the said islands is not negotiable,” Dehghani added in his letter.

UAE has asked Iran to jointly refer their disputes over the three islands to the International Court of Justice.

Map credit: The three islands in the Persian Gulf. (Library of Congress)
Posted by Nader Uskowi at 7:27 PM

UAE can go fly kite.. Or better still build some sky scrappers in anger!!! All the Arabs combined can't liberate Gaza yet they want to pick a fight with Iran??? Fools they all are!!!

And what the Nader U's position is on that issue ???

Is he supporting Iran's decisions to display Iranian flags over the Abu Musa or not ??

What are also the positions of MARK, Iddon (and Fazeli) on that issue, to display Iranian flags over the Islands ??

Iranians usually disagree on a lot of things. But the issue of these islands is one thing that I can say with certainty, we Persians all can agree on.

These are Iranian islands, regardless of how we got them. There have been many shady deals in history where people got screwed out of their land.

We are not about to go back to a 1971 memorandum to start correcting things. If we are then we need to go back a couple thousand years when half of Asia belonged to the Persians.

Actually, Iran is the only country that Arabs have ever been able to defeat. 1400 years ago and 20 years ago.

Them idiot Arabs never ever defeated anything. You should listen to Sepah commanders...thousands of Baseejis were a mile away from Basra the second largest city in Iraq with just Ak-47s and RPGs in hand and the filthy Arabs got so desperate to use Chemicals and aircraft and helicopters that French sold to them and thousands of tanks from Soviet Union, if not for all that Basra was ours. You should know that Iran literally won the war. You should know better, not to lie about all the brave Hamvatans who sacrificed everything for their country. If not for the Martyrs you would be speaking lizard Arabic language!

As I understand it, the islands belongs to Iranian dynasties for most of the last 2,000 years. What is the argument for one of the emirates having sovereignty over it?

Normally i don't waste my time on responding to illogical statements and i avoid ranting racists for as much as i can. However one must point to an interesting observation. If you Iranians won then why didn't your countrymen celebrate out of joy when the war ended, as the Iraqis did? (See the scenes out of Baghdad, Basra etc). Why were they in such a gloomy mood? Could it have been because they were worn out and simply sick of the horrible journey Khomayni had put them through starting from 1982, refusing any cease-fire proposal, and with nothing to show for when the smoke cleared and the dust settled.