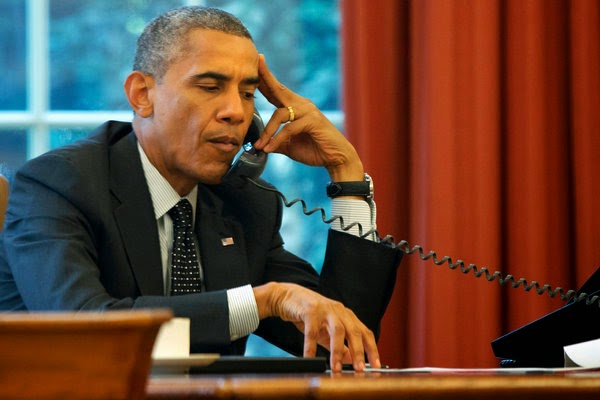 President Barack Obama on Friday discussed Iraqi crisis and his decision to order airstrikes against Islamic State positions near Erbil with the New York Times columnist Tom Friedman. Obama also spoke of difficulties to strike a deal with Iran over its nuclear program and foreign policy issues, saying some “Islamic Leaders” may fear a pact would loosen their grip on power, clearly referring to Iran’s supreme leader and his close associates.

Below are excerpts from a New York Times article on Friedman's interview with Obama. To read the article, please click here.

Industrial-scale uranium enrichment has become code words for the hard right in Iran to prevent a nuclear accord with P5+1 at this time, fearing such deal under Rouhani’s leadership will give the moderates victories in the next rounds of election for the Assembly of Experts and Majlis; their real concern is not the establishment of a new industry in the country, but losing their grip on power.

With respect, Nader, I do not think industrial-scale nuclear power industry is merely a "code word."The Iranians have been forthright in their seeking of this capacity for many years now.

The Rouhani administration has been pursuing a diplomatic strategy where greater inspection on its a nuclear industry and various other compromises are offered as a means of allaying weaponization concerns, while continuing with the country's civilian, industrial-scale ambitions.

Elections will come and go, but the Islamic Repiblic is not going to give up its independence and sovereignty, which the indusrtial-scale nuclear industry is very much placed within said context.

Mark, I beg to disagree. Building a new enrichment industry through an agreement with the West will not be a manifestation of the country's independence. The current nuclear talks for Iran were always about lifting sanctions and in turn Iran seemed willing, and sent strong signals of its readiness, to make compromise on the number of operational centrifuges to allay concerns about its breakout capabilities. This agreement was always to have an end date, after which Iran could have elected, on its own, and without a need to get Western approval, to build its enrichment industry, if indeed it made any economic sense.

At the eleventh hour, when signing a comprehensive agreement was in sight, Khamenei made a speech, and using technical language, demanded to keep 190,000 SWU enrichment capability, nearly 200,000 IR-1 centrifuges, a number that was never floated by the Iranian negotiating team during eight months of negotiations.

Khamenei's late and public intervention was to torpedo any chances the negotiating team had to reach an agreement with P5+1 by 20 July deadline. If Khamenei's main concern is building a uranium enrichment industry in Iran, which by the way might not be the most brilliant idea for economic and business reasons, he could start building it the day after the expiration of the comprehensive agreement, without any need to ask for P5+1 approval. I personally believe that Khamenei's main concern is to deny Rouhani and the moderates taking credit for lifting sanctions and consequently win the Assembly of Experts and Majlis elections next year, which would force sharing his immense powers with the moderates.