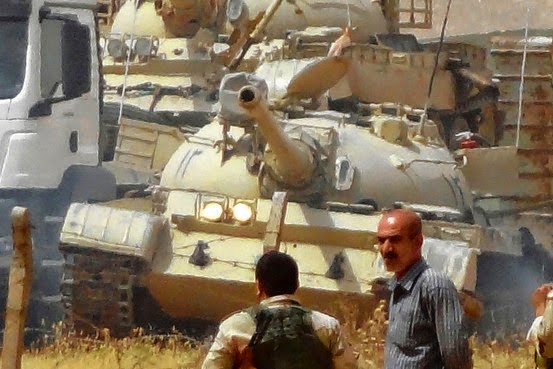 Above: Iraqi Kurdish Peshmerga T-55 tanks, of a similar type fielded by the Iranian military


On Monday, as Peshmerga fighters basked in relief in one of those towns, Makhmour, a reporter witnessed senior Kurdish commanders meeting with Iranian advisers in the operations command center there.

Thirty miles away in Erbil, U.S. advisers huddled this week with Peshmerga and Iraqi air force commanders to a similar end.

The parallel tracks demonstrated clearly that the U.S. and Iran, longtime competitors for influence in Iraq, have found common cause in the effort to resuscitate the Peshmerga, long mythologized as Iraq's most capable fighting force.

"Iran has shown support," said Raman Majid, a political representative for the Patriotic Union of Kurdistan, or PUK, one of two main factions that make up the Peshmerga. The PUK has historic ties with Iran.

COMMENTARY:  In addition to the historic ties with PUK, Iran also has historic military ties with Massoud Barzani's Kurdistan Democratic Party (KDP), that include cooperation during Operation Dawn operations of the Iran-Iraq War.

Like the Iraqi Army, the Peshmerga also possess light and heavy weapon compatibility with their Iranian military counterparts. Two examples illustrated in this post are the Peshmerga-equipped T-55 type tank (seen above), and the 122-mm howitzer D-30 seen below. 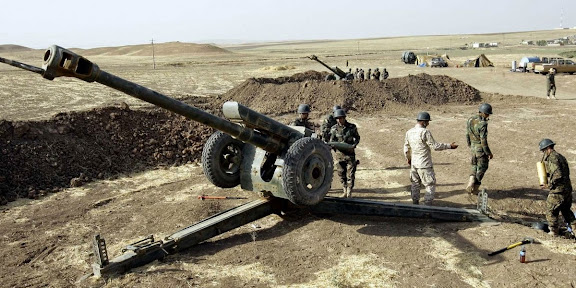 Quite interesting Iran lined up with the United States in support of the new Iraqi Prime Minister designate, in doing so stating it supported the Iraqi political process.

And so the parallel tracks of American and Iran support continue, even in the north where geographically Kurdish forces provide a sort of buffer for Iran against penetration by IS forces and their allies.

IRAN HAS A straight forward foreign policy but the 'Beacon' has a double face !.