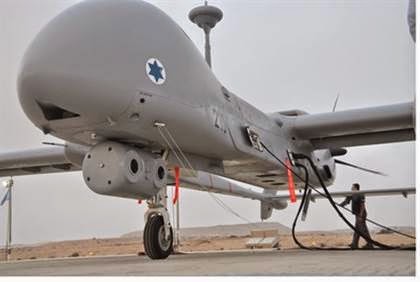 The IRGC Aerospace Force (IRGC-ASF) announced on its website on Sunday that it has shot down an Israeli drone as it approached Natanz nuclear site. The announcement did not say when it shot down the drone, nor what type of drone was involved in the incident.

Natanz is Iran’s main uranium enrichment facility. Iran’s plans for its future enrichment capacity, however, have been a serious obstacle to a comprehensive agreement with world powers over the future of the country’s nuclear program.

The Israelis have said that if Iran nuclear talks fail to produce an agreement containing the country’s nuclear program, it could take military action to destroy Natanz facility.

Israel have been threatening to destroy Iranian nuclear sites for the past 10 years. I wish they would put their money where their mouth is! BTW, it is good target practice for Iranian missiles.

the interesting news is that the drones are there

more interesting:
The drones can be tracked

The even more interesting part is that part of the drone is intact and in the hands of the Iranians :-)

It is even and even more interesting that Iranian air-defences track these drones and use them for target practice and then examine them and reengineer them. How much more interesting do you want? ;-)

Where this drone has come from? Is it from Israel, Turkey, Azerbaijan or Iraqi Kurdistan. All these nations whatever are friends of Israel. So it is possible that this drone could have come from somewhere else than Israel! Nothing surprising. Iran sends drones into Israel from Lebanon and possibly Syria.

I am not surprised that there is drone there. What matters that 1) Iran has got hold of some p[arts of the drone and secondly, it has gained valuable experience in tracing and targeting it. Another point worth noting that why this drone was not detected earlier on near the borders!

Claimed to be Elbit Hermes type UAV, with IRGC stating intent to provide physical evidence in near future.

I wonder when the fake glass fiber copy will be available for display.

There's probably nothing discernible left of it, so forget about reverse-engineering.

Apparently Iran is claiming that the drone was identified when it entered Iranian space but allowed to fly to determine its destination and examine other data which looks plausible. The other statement that it came from Iran's neighbors, the likelihood being Turkey or Iraqi Kurdistan. The crucial point is through where the drone entered Iranian airspace. The pictures shown seem to depict a drone made up of special composite metal which somehow identifies it as a an advanced drone.

There is no fake thing, the UAV came all the way from Rep of Azerbaijan over the Caspian Sea and entered Iran's northern coast and followed a path which is currently crowded with International flights going over Iran instead of Iraq due to safety concerns because of ISIS. The UAV was immediately spotted as approaching Iran's coast but decision was made to let it fly in without any scrambling of jets in order to see the flying path and also potential forced landing. Well over Iran, visual observers confirmed the type of the aircraft as it continued its path over Iran going slightly into Iranian desert passing Fordo on the east side from north in order to reach Natanz from east. As it was confirmed the aircraft did not have any payload, radar grids avoided activation and locking in order to not produce signature which the UAV could register for future potential attacks. Ground visual observers and special military airplanes from above followed the drone on its journey but attempts to hack its system and land it failed as it seemed to be on a fully autonomous intelligence gathering mission. Well close to Natanz the drone changed direction flying from east to west towards Natanz. At that time decision was made to immediately shoot it down and it was done by ground to air missile.
It is the Iranian assessment that the aircraft was trying to gather intelligence on the "eastern" path for future potential aerial attack. Most probably the UAV had continued its path from east towards Natanz, further towards Isfahan and also Arak. Thereby it had approached all major Iranian sites (Fordo, Natanz, Isfahan and Arak) from east and gathered important intelligence before leaving towards north to its origin or self-termination. Iran believes Israel is working on a surprise aerial attack which will hit the Iranian sites from the east where it has little expectation of a potential hostile Israeli aerial attack.