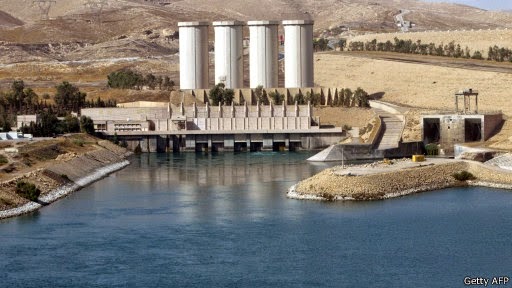 U.S. warplanes began bombarding Islamic State positions near the dam in the early hours of Saturday morning local time, and conducted 23 airstrikes in less that two days around the area. The Kurdish Peshmerga forces then mounted their counteroffensive against the militants and reportedly engaged them in one of the fiercest fighting during the current conflict. The recapture of Mosul Dam would be Islamic State’s most significant defeat to date, and would ease concerns over potential catastrophes for major cities along the Tigris if the militants were to decide to flood the river, or were unable to maintain the integrity of the dam build over soft and shifting soil.

American airstrikes against IS positions are turning the tide of Islamic State's advances in Iraq, coupled with Peshmerga ground operations, that stopped an imminent attack on Erbil and freed two important Kurdish towns last week, and now the retaking of Mosul Dam. The operations at the dam are the biggest intervention in Iraq by U.S. military since American troops pulled out of the country in 2011.

Meanwhile, the U.S. air campaign picked up momentum today, with a total 14 airstrikes against the Islamic State reported on Sunday. U.S. also used bomber aircraft in addition to fighters and drones, the Kurdish media reported.