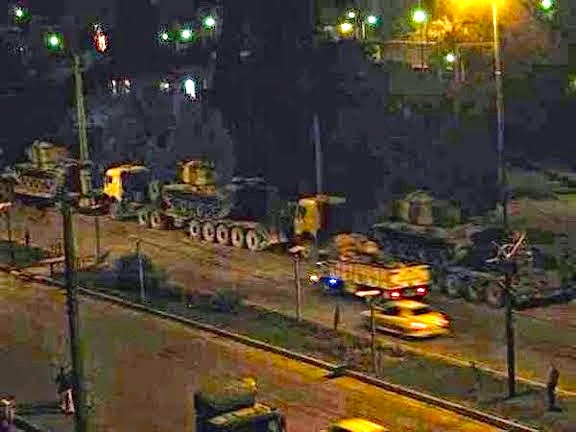 Hundreds of Iranian soldiers have taken part in a joint operation inside Iraq with Kurdish Peshmerga forces to retake the city of Jalula held by the Islamic State insurgents, Kurdish security sources have told Al Jazeera.

The Aljazeera report said the Iranian soldiers (most probably Artesh troops) crossed the border at Khanaqin on Friday in the first deployment of ground forces to Iraq during the current conflict. Elements of an Iranian armored brigade also reportedly took part in the operation.

The Kurdish security official told Aljazeera that the Iranian forces retreated back across the border on Saturday. Jalula, fewer than 30km (19 miles) from the Iranian border, is a strategic point for both countries.

A photo of what Uskowi on Iran has identified as an Artesh (regular military) M-60A1 main battle tank aboard tank transporter entering the Iraqi border city of Khanaqin is the first indication that Artesh has intervened in Iraq since the end of Iran-Iraq War of 1980. If Jazeera's report about the armor units and Iranian troops going back to Iran is accurate, it would show that the Iranian military - Artesh- was deployed into Iraq to prevent an ISIL attack on Iran's western region.

“Previously there had been Iranian assistance with security advisers and Iranian backed militias, but this does seem to be the first time soldiers have been involved,” Al Jazeera's Jane Arraf reported from the Kurdish capital of Erbil. (Aljazeera, 23 August)

The daylong Iranian ground forces incursion into Iraq was probably a probing attack to test Islamic State defenses in the area. The Iranians are probably massing their troops along the border for substantial deployment into Iraq. The apparent participation of elements of the 181st armored brigade in Friday’s operation probably indicates that the 81st Armored Division would spearhead the attack if it happens, and probably joined by IRGC-GF elements subordinated to the Kermanshah regional HQ.

Advanced on Friday, withdrawn by Saturday?

The manuever alone requires greater than 60 km (admitedly some of this distance likely covered during road-borne transport.

One wonders if NEZAJA elements actually made contact with IS fighters. Perhaps the intent was to perform a blocking action with a mech force, in assisting encirclement of IF at Jalula by Peshmerga forces.

One also wonders as to the accuracy and candidness of this operation, as provided.

Nader, I write my comment below before yours appeared.

2) Demonstration of Iran military ground force capabilities, that is to say providing a signal of potential intent and resolve.

Why are you negative about Iranian deployment in Iraq, Pyruz? Isn't it good that we're finally taking matters into our own hands regarding a threat only a few miles away from our border?

Uskowi is right. This recent deployment (and retreat) looks like an assessment by Iranian forces of ISIS' defenses and other factors on the field.

it's not merely Iran's borders that are threatened, but also the supply lines to Syria, and through Syria to Lebanon.

iran is being slowly and quite thoroughly squeezed.