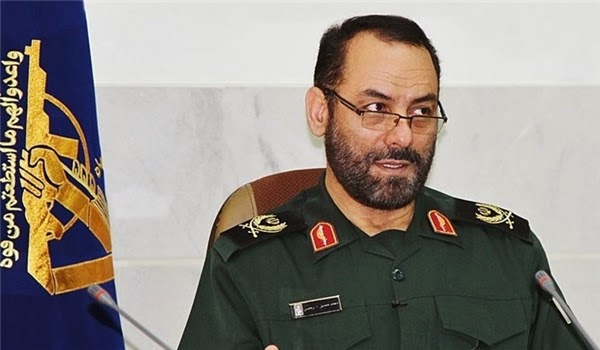 IRGC General Mohammad Hossein Rajabi, commander of Biet ol-Moqaddas Corps, with area of responsibility covering the country’s Kurdish region, today warned “anyone with intention to disrupt the security of Kurdistan region of Iran should expect a crushing response by the IRGC.” (Fars News Agency, 19 August)

Gen. Rajabi most likely was referring to the Islamic State, whose fighters have captured the town of Jalula, 14 miles west of the city of Khanaqin on the border of Iranian Kurdistan.

“No enemy can influence our security and we have the means and capability to fight at equal and even with more power the threats posed by the enemy as we believe maintaining security is our religious and revolutionary duty,” Gen. Rajabi said.

The Iranians have in the week since the Islamic State overran Jalula on 11 August, have issues declarations similar to Gen. Rajabi’s, probably showing their concerns of a possible ISIL’s move to capture Khanaqin, which will put them only 19 miles from the Iranian city of Qasr-e Shirin. Since the very first year of the founding of the Islamic Republic in 1979, Iranian Kurdistan, with predominantly Sunni population, has been a hotbed of anti-government activism and low insurgencies. The presence of the advancing Islamic State nearby could create serious security issues in Iran’s Sunni lands.

The Iranian military has extensively supported the Iraqis in their fight against ISIL, including organizing, directing, financing and arming Shia militias. But Islamic State’s possible move toward Khanaqin could trigger a more serious response by Iran, as General Rajabi was alluding to today. The Islamic State also knows this; yet any move against Iran, inside or close to its territory, could break the tacit coalition of all regional governments against ISIL. The Islamic State leadership might believe that in the event of direct operations against the Iranians, they could get the backing of the Persian Gulf countries, particularly the Saudis. Iran is signaling that they would instead face Iranian forces.

perhaps the Saudis would be quite pleased to see ISIL move into harassing operations inside Iran, given that Iran has for years supported insurgents in Yemen who have crossed the border into Saudi Arabia and harassed the Saudis.

Iran's regime has many enemies and very few friends.

donot bet your Money on ISIS in Iran
Irak,Syria,Sauidi, Yemen are Arab land. ISIS is an Artab Organization.
Iranian are not Arab and mostly not Sunni.anbd they donot understand The ISIS Langauge Artabic

ISIS can be advanced motre in Saudi Arabia than in Iran

You probably meant to send your comments to IRGC; their commander was the one expressing concerns about an intrusion into Iran. And he's probably right to be concerned.

Thx Mr Uskowi for your wise advice
I will send a message to IGRC - "be careless, do not mention it, donot thinks about it" "
but I believe thy donot listen to me

ISIS a sunni Arab organization is no danger for persian shia, to be careless and ignorant is very
stupid

How can ISIS come to Iran? They don't have the manpower/resources (obviously!), or the kind of stronghold they have in Sunni regions of Iraq since Kurds aren't your typical Sunnis. Terrorist organizations thrive on sentiments they represent. There is obviously no sentiment for ISIS in Iran!

For some reason people keep thinking Iran is like Iraq or Afghanistan! This is what they thought when a military attack on Iran because of its nuclear program was deemed imminent. We today now that's wishful thinking.

Besides, ISIS has a more immediate threat to face now that the U.S Air Force is involved.

" ISIS a sunni Arab organization is no danger for persian shia"


I seem to recall that the Persian Shia of Iran suffered quite a bit at the hands of the army of Sunni Saddam's Iraqi Arabs.

ISIS can raid Iran and blow stuff up.

and it's far from wishful thinking that Iran can be blown to fragments by a first-class modern military.

the US would have little difficulty flattening Iran

Could have, would have, but didn't. And I can only assume it didn't happen, despite all the warmongering interest groups and active Israeli lobbying for the attack, is because it couldn't have happened without a regional catastrophe. Iran is a battle-hardened force.

Is the regime evil in so many aspects? Yes, it is. Does that change strategic and political facts? No, it doesn't.

If envisioning ISIS "blow stuff up" in Iran makes you sleep better, I couldn't care less.

Anon 8:53 is right. If there is a will. there is a way. IS fighters need no support base or popular support in areas or Towns they conquer. Reports say that people who live in towns in Syria and Iraq that are under occupation by IS don't like them but cannot do a thing about it. It is the people with guns who lay down the rules while terrorized inhabitants must oblige. With that in mind one cannot exclude IS ambitions of capturing towns in Westernmost parts of Iran.

...and you are indeed the ignorant one Anon 3:34. There is nothing stopping IS from attempting to conquer towns in Ilam for instance. If they succeed or not is another matter OR to what degree they will be able to terrorize the peoples in Western Iran remains to be seen. If the motivation is present then there is a way. Not every Town in Syria and Iraq were happy at the arrival of IS fighters. Civilians have no means to resist so they have to accept the circumstances. Same things could happen in towns that lay close to the border with Iraq.

Again, comparing Iran to Iraq and Syria is silly. Iran turned a full-scale, U.N backed Iraqi invasion into an Iranian offensive in two years in the midst of a revolutionary chaos and international sanctions, and remained on the offensive for six long years.

Agreed with Piruz here, empty saber rattling has remained the cornerstone of both Israeli and American public rhetoric when it comes to intervention in Iran, and this for many reasons, ranging from Iran's ability to at least temporarily close the world's most critical waterway for oil circulation and disrupt world supplies triggering unprecedented hike in barrel prices, to the fact that its military retaliatory power is a force to be reckoned with for dozens of US installations and interests within range of its diverse inventory of ballistic missiles, without of course forgetting a second the current financial tide surrounding the tumultuous middle-eastern context when it comes to the Pentagon's coffers. A historically high projected cut amounting to almost 10% of its budget over the next few years should serve as a reminder of the constraints the US must now consider when contemplating the prospect of dealing with regional powers requiring much more than low intensity warfare to get dealt with any degree of decisiveness. Iran is no Nicaragua, Lybia, 2003 Iraq or Afghanistan, and today's US is not 1990, NATO and Gulf-supported US. I do not need to go further in detail to support that. It took Obama one hint from Moscow to stand clear of immediate action in weakened and war-torn Syria, do you think it would get embroiled in antagonizing Iran now in the midst of painstaking nuclear negotiations ? The possibility of direct US involvement in Iran is history, assuming it ever existed in any credible way in DoD's plans in the first place beyond public declarations. The region has become suddenly a lot more complex with the Kurdish factor and IS becoming a self-sustained mad dog going out of control, even on the part of the Saudis feeling the Frakensteinian heat from their tool, Al-Qaida style. That might even have repercussions on western policy vis-a-vis Assad, despite what Mr. Hagel says publicly. France and Germany have revised their stances already and restored contact with the Syrian intelligence community over risks of militant fallout from their once selected Islamist wild cards back in 2011-12. The tide is slowly turning in the Syrian dictator's favor even on this ground. Their recent blows against IS bases in Syria a few days ago are all but a coincidence. The undeclared truce between Assad and anti-FSA Nusra and IS is history too. Pieces are falling in place, and it is only a matter of time before we all see the real "game" come out of this mess, if I may call it that...

Lack of concrete military action by Iran against IS is their current refusal to appear to Sunni population region-wide as an overtly anti-Sunni power, as well as a pragmatism to the affordability of inevitably prolonged periods of sustained military ops on top of all their outstanding involvement in both Syria and, to some lesser degree, Iraq, not to mention their economic woes during crippling sanction times. Now with that taken into account, one shouldn't underestimate more hardline elements within IRGC commanding circles if pushed to the wall and left with little to no alternative but to take decisive action if need be. Time will tell whether we witness massive involvement from Iran's various military branches against a weaker foe sitting right at its border and supporting bases. Conventionally speaking, Iran obviously has the technical means to deal severe blows to IS, while the latter can pose a serious nuisance to its stability at the borders and provoke terror and destruction in towns close to it, Pakistani Taliban style. The political decision for Khamenei to unleash any portion of its forces and draw first blood against IS on the other hand, is another world altogether, and implies countless factors on top of the ones that came to my mind above. All I know for sure is that none of the actors should be underestimated.

agree with him or not, but Iran can not offer any successful resistance to US air power should it come to blows. the Iranian armed forces would cease to exist in weeks and the survivors would have tos trip off their uniforms and scatter into small bands of irregulars hiding out.