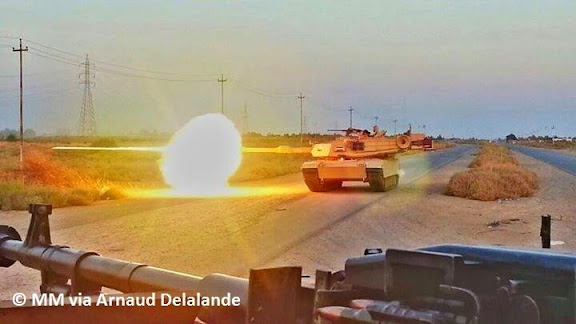 Above: Iraqi Army M1A1M on the attack, in Iraq's second attempt to retake Tikrit without CAS from U.S. airpower
Photo: "MM" via Arnaud Delalande

According to USA Today:

Top officers at Central Command, which oversees military operations in the Middle East, are urging that the list of targets be expanded, according to the officials who spoke on condition of anonymity because they were not authorized to speak publicly about the plans.

The expanded target list does not mean the U.S. military is going to hit them immediately, one official said. The list has been built up to provide options for commanders.

COMMENTARY: Currently there is tension between Iraqi and American officials over the latter's selective and very limited application of airstrikes, as reported in last week's Guardian:


Iraq's political class has watched with fear and envy in the last fortnight as American jets have slowed the Islamic State extremist group's advance towards the Kurdish stronghold of Arbil.

At the same time, the group, formerly known as Isis, has been trying to encircle Baghdad – untroubled by air strikes. Its manoeuvres near the national capital in recent days have consolidated gains it has made in the last two tumultuous months and made the very existence of Iraq in its current borders ever more precarious.

With a new central government only three weeks from being sworn in, Iraqi leaders are imploring the US to honour what they perceived to be an implicit deal to protect Baghdad once an inclusive leadership was installed.

COMMENTARY: Apparently, Iraqi officials' frustration came in anticipation of current offensive operations being undertaken by the Iraqi Army with support by Iran-allied AAH militia, in a second attempt to retake Tikrit apparently again without CAS by U.S. airpower. The Iraqi operations are reportedly now in a state of stall.

Furthermore, following successful operations to retake the Mosul hydroelectric dam, it is being reported by WSJ of visible tension between ISF Special Forces and the Kurdish Peshmerga (see below): 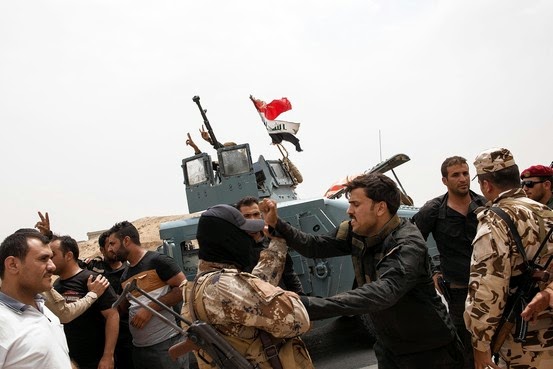 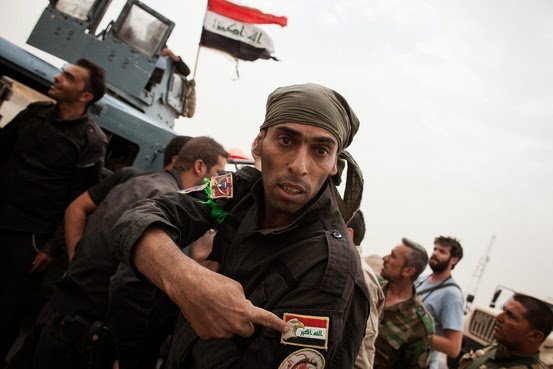 Iraqi Special Forces member points to the flag of the Iraqi Nation, to members of Peshmerga that swear primary allegiance to a semi-autonomous Iraqi Kurdistan.

COMMENTARY: It's likely the inclusion of ISF Special Forces with Kurdish Peshmerga were an American condition for U.S. airpower support, in retaking Mosul hydroelectric dam. Even so, it's apparent that Iraqi resentment for the failure of the predominantly Kurdish IA 2nd Division that facilitated the current Iraqi crisis remains in high in addition to resentment towards Kurdish opportunism in seizing Kirkuk.

American reluctance so far in supporting Iraqi operations before Baghdad is likely due to Iranian sway over Shia militias, now currently supporting IA operation in attempting to retake Tikrit. However, with facts on the ground such as they are, in mutually aligned goals toward the defeat of Islamic State, it must be asked in light of revelations of failed U.S. SF operations in rescuing American prisoners of IS such as recently executed James Foley, might the inclusion of Iranian and Syrian intelligence agencies have possibly made a difference? To such potential effect, UK Prime Minster came out this week advocating an alliance with Iran and Syria against Islamic State.
Posted by Mark Pyruz at 5:49 AM

when Iraq demonstrates that policy of inclusion the US will be happy to protect Baghdad.. perhaps the US will be even more enthusiastic when Iraq's new government puts some additional distance between itself and the Assad dictatorship and Iraqi "volunteers " in Syria dwindle.... and return to protect Iraq rather than fight for a vile dictatorship