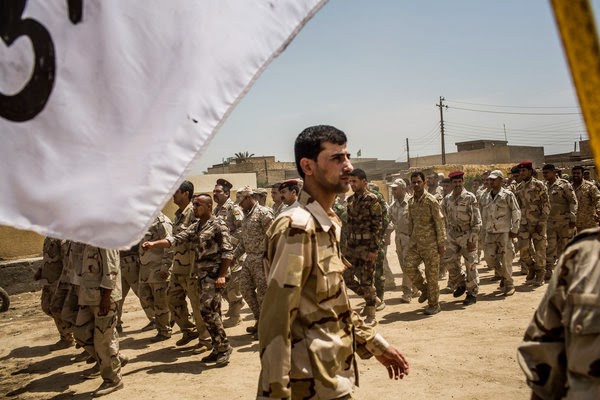 In a horrific sectarian massacre of Sunni worshippers in Diyala province, members of a Shia militia group killed at least 73 in a Sunni mosque in Bani Wais, near the city of Baquba. Officials say a bomber blew himself up in the mosque during Friday prayers and gunmen fired on fleeing worshippers. (Reuters, 22 August)

Iraqi Prime minister-designate Haider al-Abadi condemned the massacre of Sunni worshippers, while the current premier, Nuri al-Maliki, ordered an investigation into the killing.

An Iraqi security official told AFP that Shia militias affiliated with the government had carried out the assault. The official did not identify the group, but several Iranian-backed militias, including Asaib Ahl al-Haq (AAH), Kataib Hezbollah (KH) and Badr Organization, operate in Diyala province.

just another day in the house of peace

This looks to be a false flag. Increasing sectarian violence, especially thru such manner, is not in rIan's benefit and thus would not be carried out by the shia militias.

what an utterly weird and silly comment........a heinous murderous attack in Iraq "os not in Iran's benefit" and thus the news of it cant be true?

is that the reasoning of an intelligent and mature person?

A shia suicide bomber?,thats the trademark of sunni wahabist isil/isis and their fellow jihadis,this whole thing has the smell of a false flag operation

Without passing any judgement as to the identity/sect of the bomber in the main story, and only reacting to your comments, there have been reports of Shia suicide bombing; one in Ghouta, near Damascus, last year. However, on this particular attack, if it indeed involved one of the major Shia militias, it would be odd for them to use a suicide bomber. It could be that the attackers had thrown a bomb into the building, and then started shooting at the people trying to flee the scene. Nonetheless, a horrific massacre.

When it comes to suicide bombing being fanatic and brainwashed is enough.