Locked Up in Karaj

Spotlight on Political Prisoners in One Iranian City 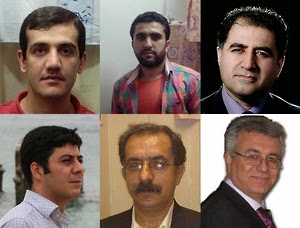 HRW’s 59-page report, “Locked Up in Karaj: Spotlight on Political Prisoners in One City,” is based on a review of 189 cases in three prisons in the city of Karaj, including the charges they faced, details of their trials before revolutionary courts, and information from lawyers, prisoners’ families, and others. Human Rights Watch concluded that in 63 of these cases, authorities had arrested the prisoners, and revolutionary courts had convicted and sentenced them, solely because they exercised fundamental rights such as free speech and rights to peaceful assembly or association.

“The election of a new, avowedly moderate president a year ago raised hopes that many of Iran’s political prisoners would soon walk free, but many remain behind bars,” said Joe Stork, deputy Middle East and North Africa director at Human Rights Watch. “The lion’s share of responsibility for releasing these prisoners rests with the judiciary, but President Hassan Rouhani and his cabinet should be doing more to press for their release.”

No offence Uskowi,but being censored is as bad as being locked up.They both serve the same purpose.Weren't the very same publishers of Uskowi critical of the IRI regarding censorship?