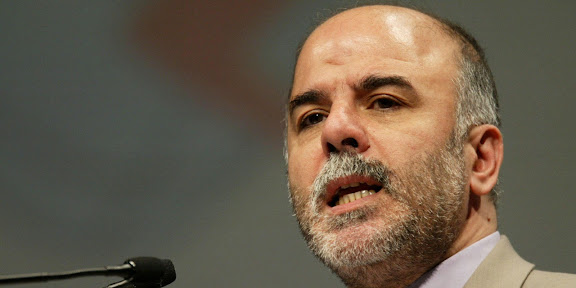 
A senior US diplomat with responsibility for Iraq on Monday congratulated Haidar al-Abadi on being tasked by President Fuad Masum to form a new government as prime minister.

Interestingly, the Badr organization were not among the supporters that tilted away from Maliki towards Abadi.

As of this writing, there has been no official Iranian communique congratulating the selection of Haidar al-Abadi to form a new Iraq government.

Unlike Maliki, during the time of Saddam Hussein, Abadi spent his exile in the West, not Iran.
Posted by Mark Pyruz at 3:42 PM

the iraq PM woll be determined by Ayatollah Sistani

given that Maliki no longer had any real support among the Iraqis and that even Sistani spoke out against him, it's rather unsurprising that he was brushed aside.

only remaining question is whether Maliki'll try to kill some Iraqis in hope of sticking around.

Badr organization breaks silence over Abadi on Tuesday. Hadi al-Ameri said the organization will support Abadi over Maliki. Ameri made the announcement after Iranian officials also broke a day of silence on the nomination and today supported Abadi.