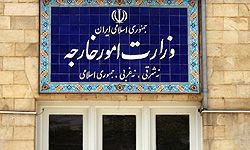 On Friday, Pan-Arab daily Asharq Al-Awsat reported that hundreds of heavily armed IRGC Special Forces had landed at Sulaymaniyah International Airport during the week and were deployed to Kirkuk province, citing a senior Kurdish security official as its source, who has also told the newspaper that the deployment was arranged by the PUK. The Kurdish Peshmerga forces and PUK’s own Asayis security force control the oil-rich province, and it was not clear why the PUK wanted the additional deployment of IRGC special forces in the area. It was the Asharq Al-Awsat’s report that sources at the Iranian foreign ministry denied today.
File photo: The entrance of Iran’s ministry of foreign affairs bukiding in Tehran (FNA)
Posted by Nader Uskowi at 6:38 AM

A well thought out and clever plan on behalf of the PUK but a very risk move on the part of Teheran. May alienate the Maliki government from its supposed ally.

Is there any news about Kubani? ISIS had them encircled.