An ‘Improvement’ over Previous Year 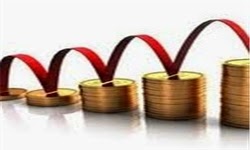 Iranian economy started shrinking in 2012, partly due to toughest sanctions against oil and banking sector - The Center for Statistics had reported that the economy had a negative -6.8 percent growth during the previous year (ending March 2013), during Ahmadinejad administration’s last year, making the latest figure of 2.2 percent negative growth an improvement, if any shrinking of an economy could be characterized as such.
Posted by Nader Uskowi at 2:30 AM

"The World Bank forecasted in its Global Economic Prospects report that Iran’s gross domestic product (GDP) will grow by 1.5 percent in 2014."

which is not at all good and will still leave the economy much smaller than it was at the beginning of 2012.

That negative 2.2 percent figure for Iran (for the year), is actually better than the negative 2.9 figure experienced here in the United States for Q1 of 2014,

Iran is a developing country, and the comparison of its GDP growth to those of mature economies is not applicable. A developing economy needs to expand every quarter and every year. Unfortunately, Iran's has been contracting since 2012, as noted by the Center for Statistics above.

BTW, in the 2Q 2014, the latest statistics available, the U.S. economy grew by 4 percent, putting the GDP growth for the first half of the year in positive territory, with 2 percent growth forecast for the entire year.

In addition to the valid points raised by Mr. Uskowi, isn't comparing quarterly numbers with annual numbers one of those apples-and-oranges situations?

Nader Uskowi,how come South Korea is a developed nation and Iran which was ahead of them in the past is still a developing country? Don't you think Iran has been contracting since before 2012? More like since the national suicide of 1979?