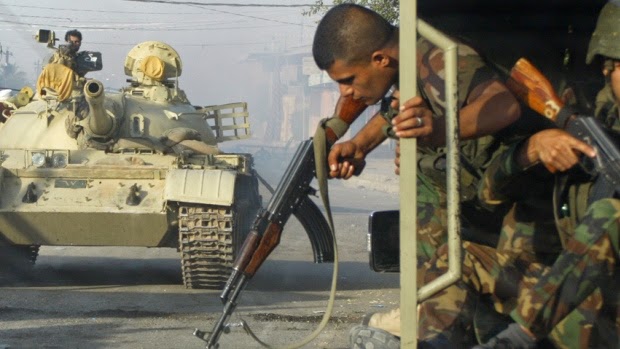 Kurdish Peshmerga forces, backed by U.S. close air support, today took a district near the eastern entrance to Jalula that has been the site of weeks of clashes with the Islamic State fighter. The IS militants captured Jalula, near the Iranian border, on 11 August. The Peshmerga will now move toward the center of the town to expel IS fighters. (Reuters, 22 August)

Reuters, quoting Iraqi security officials, also reported that Iraqi troops were advancing toward the nearby town of Saadiya,

Meanwhile, Grand Ayatollah Ali Sistani, speaking through an aide after Friday prayers in the Shia holy city of Karbala, said all sides agreed to form a “proper” government in Baghdad and repeated his call on Iraqis to fight Islamic State insurgents.

Notice the difference in how much u.s.' superior air power is making to win battles.

On the Tikrit front, those su 25s are also providing air strikes but the battles are not won.