Obama on Islamic State and Strikes Inside Syria 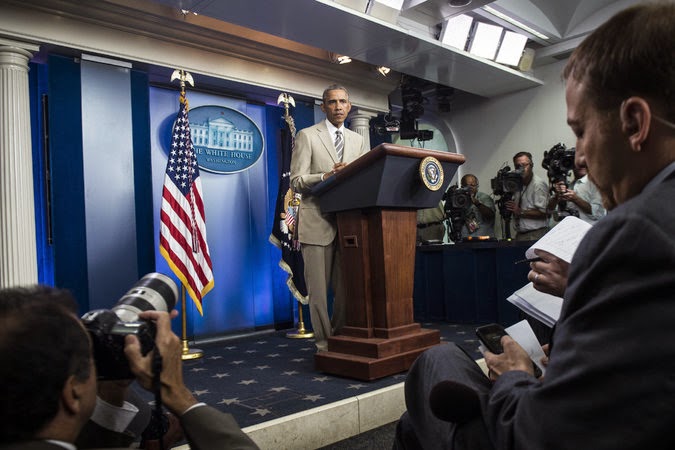 President Barack Obama confirmed that he had asked Defense Secretary Chuck Hagel for options for U.S. military strikes inside Syria targeting forces of the Islamic State. Obama cautioned against expecting imminent action, however, saying he wanted to build a formidable international coalition first.

The president made the comments during a news conference at the White House today.

“We don’t have a strategy (on military action in Syria) yet,” Obama said. “Folks are getting a little further ahead of where we’re at.” (The New York Times, 28 August)

He said he was sending Secretary of State John Kerry to the region to assemble a consensus approach for rolling back the gains by the Islamic State.

“My priority at this point is to make sure that the gains that ISIL made in Iraq are rolled back and that Iraq has the opportunity to govern itself effectively and secure itself,” Obama said.

“Clearly ISIL has come to represent the very worst elements in the region that we have to deal with collectively,” he added. “That’s going to be a long-term project. It’s going to require us to stabilize Syria in some fashion.”

Obama rejected the notion that strikes inside Syria would have the effect of helping President Bashar al-Assad in his brutal and long-running Syrian civil war.

“I don’t think this is a situation where we have to choose,” Obama said. “We have to give people inside Syria a choice other than ISIL or Assad. I don’t see any scenario in which Assad is able to bring peace and stability (to his country.)”

Photo credit: President Barack Obama at his news conference in the White House, 28 August 2014. The photos of the president wearing a tan suit is going viral in social media! (Photo: The New York Times)

It's obvious the U.S. won't be able to achieve a UNSC resolution sanctioning airstrikes on Syria without bringing on board the Syrian government.

It's also apparent the more reliable ground force partner for U.S. led airstrikes against IS in Syria is the SyAA, NDF and dare I say it LH.

For these reasons, the Obama administration is in a real dilemma. And even though it's hard to admit to, the U.S. policy of regime change in Syria is definitely a factor in the rise of Islamic State.

Indeed there would be a dilemma if one has to choose a brutal dictator as his/her partner to fight Islamic State insurgents. That's the Syrian dilemma, and in the long-run it needs to be addressed by the Syrian people, establishing a real alternative to dictatorship and Islamic fanaticism. U.S. intervention in itself will slow down IS advance, which could be the only way to proceed, but will not resolve the dilemma.

The Iranians have poured so much arms, manpower and money into the Syrian conflict in the past three years, but because they took side with the dictator they could not help end the roots of the current conflict. With all their power in the country, they could not stop the Islamic State from taking roots there, and were surprised when the Islamic State insurgents gathered a large force inside Syria and crossed the border into Iraq and occupied Mosul.

The Islamic State advance in Syria needs to be stopped, preferably by a coalition of countries, and sooner the better. But the future of the Syrian governance should be addressed by the Syrians. Dictatorship or Islamic fundamentalism will not address the problem in the long-run, it only create more problems.