Khamenei: Reformist Politicians Have No Place in Governance 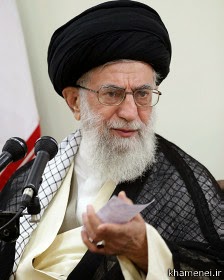 Iran Supreme Leader Ayatollah Ali Khamenei in a meeting Wednesday with Iranian President Hassan Rouhani and his cabinet warned that “Fitnah” (meaning sedition, a term Khamenei uses for reformist opposition) is the regime’s “red line,” urging Rouhani  to stay clear of the reformists.

Khamenei was very clear about the “red line.” No reformist could hold a position of responsibility in the government, and any minister appointing him or her to such positions will be impeached, as was Danai-Far last week. The acceptable voice coming out of Rouhani administration should now approximate that of the hardliners.

Last year, the reformists and moderates supported Rouhani’s election. He won in the first round, carrying 28 of Iran’s 31 provinces, including all major cities. The candidate of the hardliners, Saeed Jalili, won only 11 percent of the popular vote, and could not carry a single province. But it is Jalili’s voice, and those of the hardliners, which is the preferred voice by the supreme leader; and Rouhani is so warned.

Agreed! Replace this guy with Mohammad Reza Pahlavi. You won't see any difference. The only notable difference is that Iranians in Pahlavi era had a degree of social freedom compared to 40 years later.

...one man uttered one word...and with it he crushed all reformists' dreams.

When's this guy gonna die? If he really thinks Rouhani's going through the trouble of solving the nuclear Issue with six world powers just to please the clerical establishment, he has another thing coming.

People had much more social freedom then, cannot even compare it to now. And the country was doing much better economically as well. You only lived in fear if you were a communist or marxist. Pahlavi held a tight leash on them as he feared the giant russian bear next door. It was the Cold war afterall, No matter the government in place it had no choice but to lean towards either kapitalist U.S.A. or communist U.S.S.R. Take your pick.

Anonymous 8:59 AM...... At least we had social and economic freedom as compared to todays Iran. The present regime is one thousand times worse and as disastrous as the arab conquest of 1400 years ago. This regime can't be and doesn't want to be reformed in any shape form or colour.

that's what Iran will continue to get until it replaces a government that is, in the final analysis, a theocratic dictatorship.

this regime must be entirely reformed or abolished

-you wish someone to die crudely as if you never went to school!,- of all people ,least expected from someone like you.Now if He dies ,and He will by God's love -will he go with the establishment altogether?,plainly NO!.

YOU have to attach the constitution and the office of the leader ! ,not THE PERSON in the Name of Kamenei.Logically you would do the same if you were put on His place!.

For all the gualible "voters" who went last time and wasted their time (for a big KEY and some purple baners) Don't waste your time the next time !
This is a theocratic dictatorship and there is no such a thing as elections, only "selection"

Lol. What an awful Hell hole run by an 80 year old lunatic and his thieving family

It's really painful to see that some people still believes in reforming this regime. Khob-e-Khargooshi comes to mind.

What should people do! If they don't vote they give the country to the maniacs, if they vote they do not have the mandate! I think at least this way the clergy have no excuse screwing up the country and people should still vote and push for reform. I don't see any other alternative.

Piruz Mollazadeh....Don't worry about that.Khameini will go for sure as well as the Omatistan that he and his chums have created out of Iran.

What's really disappointing is that one unelected man, with more power than all elected officials in the country out together, can draw arbitrary red lines for the regime meanwhile the elected president has to do miracles (nuclear deal, lift sanctions, improve relations with the West) and still wouldn't be able (as we know from this recent red line of Khamenei) to incorporate a large moderate faction into his government in order to improve personal freedoms and civil rights.

The people of Iran voted for Rouhani because he promised to improve the human rights situation as well as the economy of the country. The nuclear program had to be addressed first because of its place in Iranian politics. Obviously once a comprehensive deal was signed Rouhani would want to use his diplomatic victory to gain support within the system and finally do what he must to keep his promises. But now Khamenei has hinted that, by drawing a red line that criminalized the reformists, he doesn't give a fuck whether Rouhani delivers a nuclear deal or not, because he isn't about to lose power to the president and his ministers by allowing Rouhani to keep his promises.

I don't hate Khamenei, I just hate it when the balance between democracy and theocracy in the Iranian politics becomes so unfair.

Agreed. If all the millions in Iran woke up they could quarantine these archaic clerics to Qom where they belong. There they can have their own Shia islamic state and whomever wishes to live under Sharia laws can move into the confines of the Akhoonds.

The diktator has spoken, so much for "Islamic democracy". LOL!

I mean sure I sincerely appreciate Khamene's goals of Iran being independent, power projective (aka not having to fights its battles on its own borders like in the 70s). But it's about time the people, and not just the regime, benefited from Iran's major position in the Middle East and soon the international community. Why can't Khamenei, whom I'm not going to label as a mad hard-liner like some of the people he places on some rather strategic positions in political system, understand that? It's because he's a cleric, isn't it?

He can gain so much love and respect from all kinds of Iranians if only he appreciates that particular point. I was happy to know a few days ago that Khamenei "appreciates" the efforts of the current government, only to find out that he was trying to soften Rouhani before giving him a rather rude warning about who he should or shouldn't include in his elected government.

So no, I'm no pro-Pahlavi wanker or anything. I just think it's about time the people (and not just the clerics) benefit from the Islamic Republic's achievements. We are, after all, the "spark that lights the revolutionary fire of the Islamic republic", are we not?

Piruz Mollazadeh...After 2009 fiasco Khameini has gone beyond Iranians ever holding any "love and respect" towards him. And in future kindly refrain from name calling other Iranians with different opinions and are not supporters of the islamic regime.