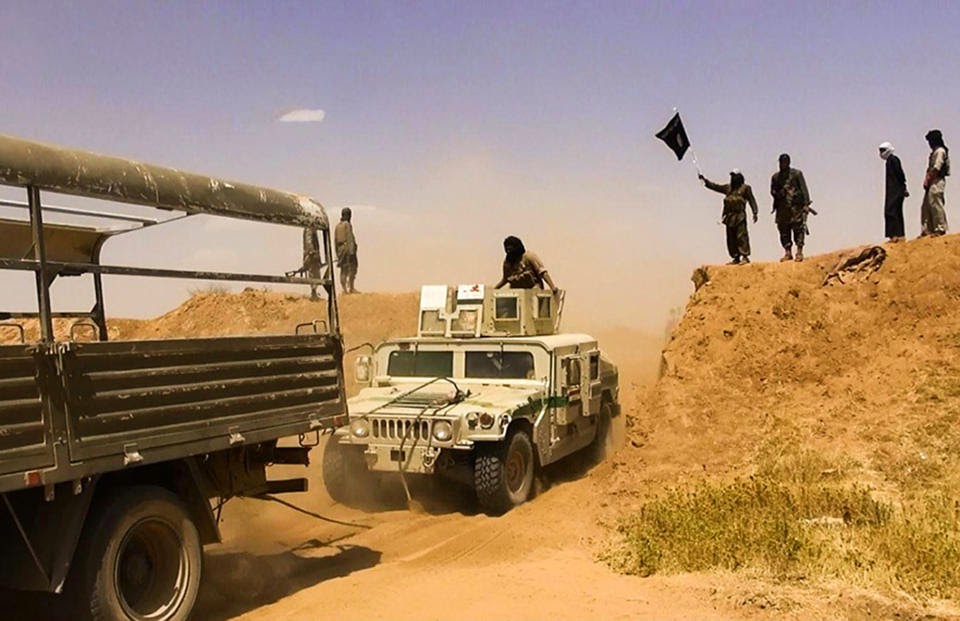 Chairman of the Joint Chiefs of Staff Gen. Martin Dempsey said defeating the Islamic State would not be possible without attacking its fighters in Syria. Gen. Dempsey made his remarks today during a joint news conference with Defense Secretary Chuck Hagel at the Pentagon.

The Islamic State has reportedly as many as 17,000 fighters who can move across the Iraq-Syria border with impunity, The New York Times said today, quoting U.S. military and civilian officials. U.S. warplanes have conducted 90 airstrikes against IS positions since 8 August, including 20 since they beheaded James Foley, an American journalist.

American officials said that the United States was conducting reconnaissance over Syria, but that attacks by drones or manned strike aircraft on Islamic State positions in Syria had not been ordered. (The New York Times, 21 August)

Other important points covered by Gen. Dempsey and Secretary Hagel at the news conference on Islamic State (IS):
File photo: An image taken on 9 June 2014 shows Islamic State militants waving their flag on the Syrian-Iraqi border after destroying the berm marking the frontier between the two countries. (AFP)

Maliki’s ouster happened after major actors in Iraq; Shia, Sunni, Kurd leaders, as well as the U.S. and Iran, agreed that he had become part of the problem, not the solution to the Islamic State advances and crisis in Iraq. If major actors involved in the Syrian crisis see Assad also as part of the problem, much like Maliki in Iraq, then it would be that much easier for the U.S. to hit IS positions in Syria, and together with Iran, Syrian leaders of all sects and nationalities, the Syrian army, local and tribal leaders, and all anti-IS militias could defeat IS for good.

great thinking. executing Bashir and exiling the rest of the Assad family is something good that everybody would support and possibly enjoy.

who can argue against dismantling a police-state dictatorship and ending the family responsible for killing 100,000 and more Syrian citizens?

this would be a great first step toward rebuilding a sane and decent Syria and cutting the legs out from under the jihidists.

The big problem there is that assad still has substantial support both internationally and locally,I cant for a second see either russia or iran giving up on him,and even if for arguments sake they did who would you then replace him with?,you`d run the risk of winding up like libya or worse

AnonymousAugust 21, 2014 at 11:39 PM
How would removing assad result in "cutting the legs out from under the jihidists."?
most of these groups have been trying to destroy the syrian government and replace it with some kind of wahabist caliphate,tho ironically up until now most of the fighting by the isil/isis jihadis has been against other rebels/jihadis who it seems are incapable of stopping them,the idea that if you get rid of assad then everyone can put aside their differences and team up to beat isis is totally idiotic and thats putting it nicely

Assad's departure will not end the civil war in Syria, as Maliki's departure in itself will not resolve Iraqi crisis. Maliki's departure was a first step, however, to form a national consensus against the Islamic State; many political factions, including prominent Shia leaders, could not unite under Maliki's corrupt and authoritarian rule. Same in Syria; it would be tough to unite all factions under Assad's command, a man who is the embodiment of more than 40 years of corrupt and authoritarian rule over Syria by the father-son team.

Of course the fight against the Islamic State has priority by far over the fate of Assad and his government. The ISIL could be beaten if the U.S., Iran and other international actors are also involved, as is the case in Iraq. But do we want to defeat ISIL to have Assad back as the country's dictator, instead of a government of national unity? Probably not. But I've seen stranger things in this region!

These countries (Egypt, Jordan, Syria etc) are all artificial countries that were trusted to some local chieftain that ruled them by Iron fist (thus prevented sectarian violence). That was the only way to keep the order. Now you guys think that democracy is going to grow out of nowhere! All these countries are majority Muslim with some other small minorities. Islam and democracy are NOT compatible. I thought after thirty odd years of Iranian revolution, we can now agree on that!

It seems that you had the above response ready to have publish it anyway. The discussion here was not about democracy, its compatibility in Egypt, Jordan or Syria, and how it could be attained. We were discussing Assad's and Maliki's authoritarian and sectarian rules, and the need for them to step down giving the governments of national unity a chance to be formed in their respective countries.

BTW, Egypt is not an artificial country, nor are Iran and Turkey. They are old countries in the region.

I meant Iraq not Egypt. Although having said that it makes no odds. What is the definition of a government of national unity here? In other words is there such thing as government of national unity among Arabs. Both Assad and Saddam belonged to minority in their own country but held Syria and Iraq intact by means of force. How about Cyprus and Ireland. They are still divided on ethnic and religious lines unable to reconcile the Country. When the hatred runs deep, the idea of having puppets belonging to different sects like Lebanon does not make sense. Despite all these icing on the cake, Hezbollah runs supreme in Lebanon. Iran is at least light years ahead of these neighbors in the sense that despite different minorities (granted excluding Arabs and Baluchis), the people live together in peace. The other notion in Iran is that I believe Iranians think of themselves as Iranians first and belonging to a minority second. In other words the unity of Iran is a manifestation of its Nationalism which has held it together. I cannot see such tendency in Iranian neighbors.