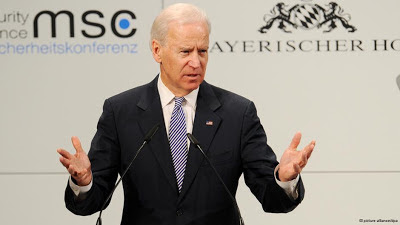 “The ball is in the government of Iran's court. It is well past time for Iran to adopt a serious good-faith approach to negotiations,” Biden said. “Abandon the illicit nuclear program and your support for terrorism and there will be meaningful incentives.” (DW, 2 February)

Biden also said Washington was open to holding bilateral talks, but Iran had to offer a real agenda and not talks for the sake of talks.

“That offer stands, but it must be real,” Biden said. “There has to be an agenda that they are not just prepared to do it for the exercise.”

“Iran should not wait any longer to take up the willingness Vice President Biden has stressed to hold substantial negotiations on its nuclear program,” Westerwelle said. “From our point of view, announcing an accelerated expansion of uranium enrichment in Iran is the wrong signal,” he added. (DW)

With what evidence does he claim Iran's Nuclear Energy Program as illicit?

they have no choice ,but act like a human being and beg iran to cooperate with them. iran today will,negotiations from strength.to all iranians haters on this site,take realestate in hell.

It is my opinion that this is Iran's last chance to negotiate a deal in reference to their nuclear program, before severe actions are taken against the regime. Think hard, think fast, as this opportunity will not be on the table for long.

You are such an immature little cretin.Since when has the regime in Iran acted like human beings towards Iranian people and you expect others to treat those lunatics in power like human beings?
Looks like the Islamic leadership has reserved a large estate in hell already.

if you don't like the message don't attack the messenger.who is more lunatic,people in washington who have killed 4 million innocent iraqis and invaded two countries and killing hundreds of people by drones every day,or iran who hasn't invaded any country in last 300 years?????oops.

your numbers are utterly stupid and obviously invented out of your ignorance.

okay wise guy,you want to play numbers,lets do it???????. since first bush( the father) to second bush, son. according unisco 1.6 million iraqi children died from sanctions by u.s and lack of medications and proper nutritions and 100 thousands civilians during war.according to red cross 650 thousands people died under (second push) war.more than 2.5 millions iraqi were displaced and scattered to surrounding countries, thousands of them have died for lack of medication and lack of proper medical care.thousands of iraqi are born every year with birth defect from u.s depleted uranium bombs that they dropped in fuluja and other cities.look at the report for yourself on you tubes.as far as iran, name one country that we have invaded or have attacked in last 300 years??????sorry wise guy.one dead is too many .if millions of life mean nothing to you.then you need lobotomy.(i hope this site publish my comment i have no faith if they do).

The 34 long wasting years of the U.S. and Israel's empty 'barkings' plus 'talkings' against IRAN. What the world Zionist boring rethoric!

It's a good thing you got your stats from the American Red Cross, which is a reliable source. How about you do some real research and figure out how many innocent women/men/children Sadam killed during his time?? I didn't agree with the invasion of Iraq, but if your going to throw stats, then throw them from both sides.