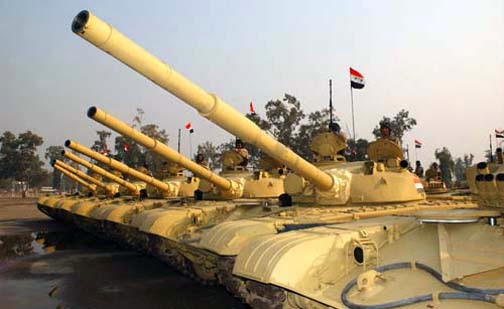 
Deputy Chief of Staff of Iran's Armed Forces Brigadier General Mohammad Hejazi says if necessary, the Islamic Republic is prepared to give military equipment to Iraq to fight al-Qaeda.

Asked about some Iraqi media reports that Baghdad is seeking help from Iran and the US to assist its operations against al-Qaeda, Hejazi said on Sunday that no official request has been made on Iran in this regard.

“Nothing has been discussed about a joint operation against Takfiri terrorists, but if Iraqis need equipment and consultation, we will help them,” the Iranian commander added.

Iraq has been leveraging support in its war against al-Qaeda, requesting additional firepower in the form of American arms deliveries, while at the same time signalling potential support from Iran. For their part the Iranians have been supporting military efforts against al-Qaeda and related Takfiri elements for some time now in neighboring Syria.

Clearly the regional al-Qaeda (AQ) threat that emerged as an unintended consequence of the U.S. invasion of Iraq transited from Iraq into Syria as a result of its experienced setbacks, only to remerge and spread from its current territorial base of area of operations in Syria back into Iraq.

Al-Qaeda and its allied combatants are seen as a common threat by Syria, Iraq and Iran. Should Iraq's military situation take on the dimensions of the Syrian conflict and should Iraq's political leadership request it, IRGC Brigadier General Mohammad Hejazi's public offer of support would likely be honored.

Below is map depicting curent ISIS/al-Qaeda area of operations and partial control: 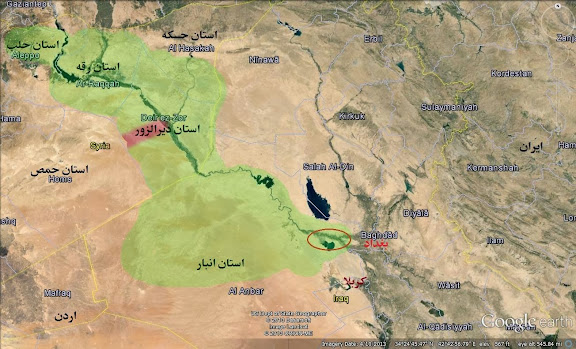 The ISIS assault on Syria and Iraq is indeed a manifestation of a much larger struggle within the Islamic world, dividing the proponents of establishing Islamic societies based on strict adherence to Sharia, and the proponents of a more pragmatic form of government recognizing the requirements and necessities of the modern world. Such divide cuts across Sunni-Shia boundaries. In fact, I argue, the Sunni-Sunni conflict on the meaning of an Islamic society is as pronounced, if not more so, than Shia-Sunni conflict.

The ISIS is not just against Assad in what they believe to be his adherence to non-Islamic and secular form of governance, but as strongly against the Sunni opposition who adhere to a more pragmatic understanding of a government in an Islamic society.

Variants of this historic struggle could be seen across the Middle East. From Afghanistan to Iran, to Iraq and the Levant, to Turkey and Egypt and Tunisia and beyond. Let's just hope that the struggle remains peaceful; as civil wars based on religious and sectarian views could last forever, and throw the region back to darkness.

The Iraqi government isn't leveraging anything. It's being kicked in the arse for getting too cozy with Tehran.

Iran can issue statements about sending military equipment and military advisers to fight in Iraq, but the real message here is that the fighting in Syria in which Iran is deeply involved is spreading and it's heading toward Iranian territory.

Can Iran afford that?

Iran military voices support for Iraq against al-Qaeda. Meanwhile, the USA and its allies voice support for al-Qaeda and related groups against Syria.

Is it me or non-sense comments like the last two are becoming a norm om this blog? To Gents who wrote those comments: Ranting, spewing hate, and random comments only hurts whatever point (assuming to be anti-Iran and or I.R.) and reinforces the view that opposition to Iran are intelligently challenged!

What about Saudis? Can they afford terrorism inside their "country" (actually sheikhdom)

not any more than Iran can.... both lousy regimes are weak.

Anti-regime doesn't mean "anti-Iran". Iran is a victim of this terrorist islamic regime as well.

ISLAMIC Law is a blessing upon humanity in general and Muslims in particular!!.BUT how do you use violence and cruelty to impose a divine law?.Afghanistan and Somalia are two examples of failed attempts on sharia law.The latter saw masses singing in jubilation after being liberated by the Kenyan /British/Israeli forces[in a joint mission to fight al Shabaab inside Somalia after the murder of a French tourist in Manda bay off the Kenyan coast]-Whenever they libarated a city or village that was under al Shabaab,the people would rejoice and narrate horror tales of brutality under al Shabaab.
Afghanistan was the same case.People rejoicing the fall of the Taliban in their country.
@LET us remember the late CAIRO al Azhar grand mufti,Tantawi when he invited bin Laden in the university to "come show me IN the Holy Koran where you get all this cruelty".

You don't fool anyone, Anon 7:27 PM. The regular, racist comments from hasbara shills here, calling Iranians "dishonest", "liars", "criminals" and countless other labels, contradict you. It's too late for the Iran-hating people to backpedal now.

Iran is powerful just look how Iran project power in different places and effectively making a seat for itself for all regional powers. It is why US start to realign itself toward an Iranian alliance,

hasbara shills operate according to the idea of By Way Of Deception, Thou Shalt Do War. Anti-Iran people are easy to see through as the hate filled racists they are.

You should know by now that the Islamic dictatorship in occupied Iran is only concerned with Pan-Shiaism,therefore Iran is a platform for this cult. As far as the regime is concerned it could have been Sudan they occupied,because end of the day it's just a base to further their aims. So the Islamic terrorist regime and their minions by their use of "Deception" are the real "anti-Iran" entity.

BMA
Can you please expand on how " ISLAMIC Law is a blessing upon humanity in general and Muslims in particular" ?

Anon 7:16 PM......How can an Iranian be a racist against another fellow Iranian? Your stupid comments don't work here on this blog.

What is clear for all to see here, is non-Iran zionists, being racist against Iranians.

And and what we see here are "non-Iran" bus boys trying to flog their dross over these pages. Won't work I'm afraid.

However much hasbara shills use this:
Plain folks: The plain folks technique attempts to convince the listener that the speaker is a 'regular guy', who is trust-worthy because the are like 'you or me'. http://www.sourcewatch.org/index.php/Hasbara They will convince everyone that they are ordinary Iranians.

Islamic law is a blessing for sub-human oppressors like the regime of islamic terrorist republic.

it is indeed a blessing to HUMANITY !- we shall give you the facts -InshaAllah[by God's leave]!

I rather believe the so-called "hasbara shills" than a anti-Iran islamist like you.

Not "HUMANITY" blackman adam but SUB-HUMANTY ! The type that comes from under the gutter !

Admitting that you're a zionist. That's good, the first step. It's more than a lot of other zionists can do.

At least the "zionists" don't sell their country to the lowest bider like the terrorist islamic dictatorship occupying Iran does.

They just leach off the American taxpayers while betraying America, instead.

It's OK. At least they don't betray their own people unlike what islamic terrorist dictatoship does against Iranian people.

So, according to zionist logic, harming zionists is not acceptable but, harming other people is.