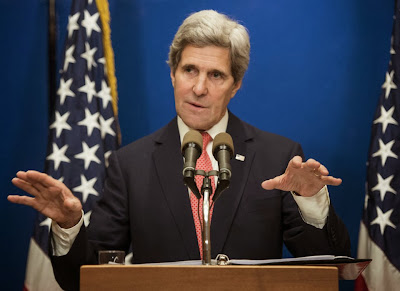 Kerry also said that there would be limits on Iran’s role if Tehran did not formally accept that the goal of the conference would be to work out arrangements for a transitional authority that would govern Syria if President Bashar al-Assad could be persuaded to resign.
“Now, could they (the Iranians) contribute from the sidelines? Are there ways for them conceivably to weigh in?” Kerry said. “Can their mission that is already in Geneva be there in order to help the process?”
“It may be that that could happen, but that has to be determined by the (UN) secretary general,” Kerry added. “It has to be determined by Iranian intentions themselves.” (The New York Times, 5 January)
Kerry made the comments at a news conference in Jerusalem before he headed to Jordan.

Russia and the UN special envoy for Syria have argued that Iran should participate in the talks. The U.S. and France have insisted that Iran’s participation should be linked to its acceptance of the goal of the talks: a transition to a governing structure that could exclude Assad.

Photo credit: U.S. Secretary of State John Kerry at the news conference in Jerusalem. 5 January 2014. (Yahoo)
Posted by Nader Uskowi at 11:40 AM

whot dies meaqn tis nonsense
“Now, could they (the Iranians) contribute from the sidelines? Are there ways for them conceivably to weigh in?”

Without Iran nothing goes in syria

Who has messed the letters in your sentences.

Maybe some propagandists want to show that they are better "educated" than those who criticize "Keryy".

Iranians could be of some use by catering the talks.

The syrians have the absolute right to decide their future and who rules them. Syrians are not fools, they can see and understand all the drama.

Those that sponsor terrorism in Syria cannot be accepted to impose their will on syrians in pursuance of their own goal.

Some are trying to convey a conference with predetermined goal, it is absurd, it is unacceptable, they call themselves 'Friends of Syrians', then send bombs to terrorists to kill them, destroy their homes, fill their cities with hatred, cause division in their land and destroy all their valuable. Now they want to impose a future on them with the terrorist at the helm of affairs.

So it's our American position that Iran can participate only if it subordinates its own interest to that of the United States, in pushing forward the predetermined outcome of Assad stepping down.

From Iran's perspective, it's this kind of subordination that constituted a major reason for its 1979 revolution.

Not to mention, this preditermined outcome is also rejected by Russia and China.

There's still time for a diplomatic accomodation, should our American position shift away from a predetermined outcome, to that of a realistic approch towards a more realistic peace process.

No you`re thinking of the french,thats about all they`d be good for really

AnonymousJanuary 6, 2014 at 12:36 AM
Mark PyruzJanuary 6, 2014 at 12:41 AM
Well said,just more typical western arrogance and hypocrisy,these talks are irrelevant,the western backed rebels no longer exist as a fighting force its the syrian government vs the saudi backed jihadis

Did you notice how the beacon of democracy was quick to arm ,train the Syrian insurgents -in Jordan AND Turkey ?so as to violently remove an enemy of democracy in the person of Assad!.IN ENFORCING and agitating for democracy ,the US wont disappoint you!.It has so many methods to remove dictators in a noble effort to liberate a people ,Starting with sanctions to a blitz!-rallying its allies for a military campaign!ALL IN THE NAME OF democracy.
You will be convinced that this empire is a character caring divine blessings and supervision leave from the heavens.But what will shock you is how this same empire dines and wines with the same criminals opposing the religion of democracy,WHO go further to cut into pieces and mock basic values of human rights.

SO let us highlight two distinct policies of the US that will put you beside yourself !-feel free to shower me with any tittles including a Slave , 'Nigerian sorcerer 'BUT IN THE end of the day these two cases will show you who deserve to be on the SYRIAN peace table.IS IT --IRAN that has always sided with people or a beacon of democracy that has sided,trained ,and funded saboteurs ,criminals,hardcore al Qaida zealots! to VIOLENTLY remove a 'Dictator'-

The US finds the need to side with the masses agitating for democracy.Humiliated by their dictatorial Leader they get some funding and training in Jordan and Turkey to fight FOR THEIR RIGHTS!.The US throws its full weight behind the opposition and goes ahead using public opinion to portray them as liberators- Not until these 'democrats' start eating human organs is when the US realizes that the problem is bigger than seen.

-It was the same scenario -masses making genuine agitation for democracy and their right.the white supremacist regime there was worse than anything. So the masses often rallied ,the result was shootings imprisoning ,silencing,and because the cruel government controlled the media, many people were killed and are not accounted for.
But the ANC had a military wing -'ekwonto we sizwe' that wished to take on the more superior white Rulers AND WAS IN DIRE NEED FOR SOME BACKING!.-And YOU expect the beacon of democracy TO came along to train them in Rhodesia, or EGYPT !!.[the same way it is doing with the Syrian opposition]

YOU are mistaken!! -the B.O D sat on the fence,fumed on the liberators,courted the cruel regime as you can see with the current Kings of the Persian Gulf.Went ahead to help the regime there hunt opposition elements, eliminating them ,killing the spirit of the movement ,but this was not enough ,through Israel ,the US armed this cruel regime with a new capability-a nuclear plant build deep in the Kalahari desert and tested in 1979!- in a very symbolic effort to prop up the regime and kill any democratic efforts!.

Anonymous January 5, 2014 at 9:24 PM. Better to remain silent and be thought a fool than to speak and to remove all doubt.

John Kerry says: " Oh look, i have strings attached to my fingers, which i'm pulling at will... cuz I'm the puppet master! :))"

Kerry use to apply double standards in his life, where he had used to vote for abortions and at the same time to claim that he is " a member" of certain church that oposes abortions.

In his recent proposal Kerry has been envisioning that presentatives of the Islamic Republic will assist and legitimize abortion of President B. Assad from the political life in Syria, giving example that it is OK to dump their friends under "the bus" for an unknown bribe.

Like the past and present times have been showing, most of the US actions and their insane proposals require a sacrifice of additional tens of thousands innocent victims, to fulfill insane visions of their democracy..