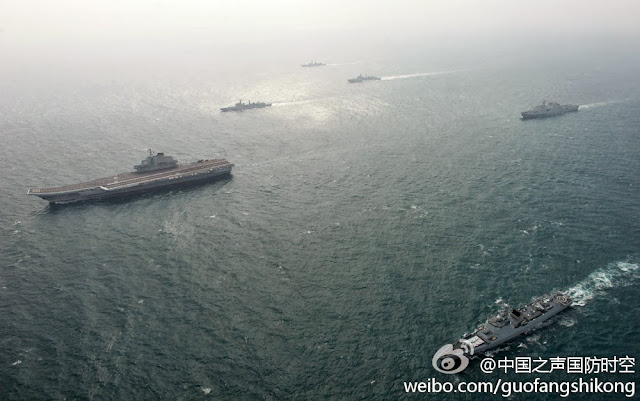 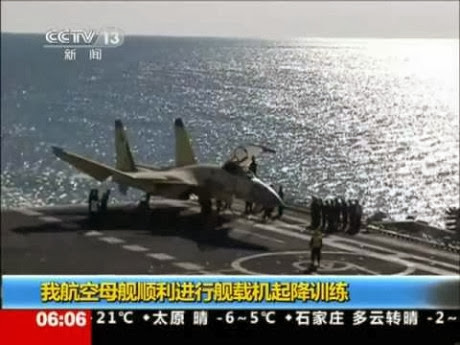 The Aviationist article is a weak one. It's author seems unfamiliar with China's history and geopolitical posture. He assumes China's intention is to create a galaxy of military bases around the globe, incurring great expense in the process, following the American example.

China's current military interests are for the most part defensive in nature, as well as reasserting control over territories to its east it sees in the historical context as its own, such as Taiwan and areas within the South China Seas. For that, its current naval trend appears logical.

For an emerging power, you have to start somewhere and PLAN has quite a bit of learning to undertake.

My intent for posting the story was to report on China's impressive first aircraft carrier and its BG. The debate on China's military policy and strategy needs a thorough discussion, out of scope of this blog.

That is a secoind hand Russian/Soviet refurbished career. Chinese cannot make an engine for their own aircraft. They are all imported from Russia!

How it is related to Iranian issues?.

Only indirectly. This is how to build a navy!

AnonymousJanuary 3, 2014 at 6:04 PM
Actually the chinese are well on their way to building world class high bypass turbofans for fighters give them a few more years and they`ll be up there with the best russian/western ones.Only a fool would underestimate china,the enormous leaps they have made in the past 25 years are nothing short of staggering

"this is how to build a navy"-good observation on your part, NOW directly do you have any suggestions to give on the general performance of the IRI on its efforts and endeavors to modernize its navy?

Adam man does your country have a navy? What is your view about the level of corruption in the dark continent especially Nigeria. Should we convert all Nigerian animists into Shia Islam and properity will florish! You are barking under the wrong tree man!

Annon. Jan. 3 6:04
Yes and the Rover that they sent to the moon recently was also built by NASA !

AnonymousJanuary 4, 2014 at 11:05 PM
The chinese took an unfinished hull and completely rebuilt it into the brand new functioning aircraft carrier we see today,this is no small achievement and there is nothing "second hand" about it its simply more evidence if any was needed of what the chinese are capable of

Anon 3:25 AM
Sure it's an "achievement" for China. But it is still a second hand diesel powered aircraft carrier. If war breaks out it would be the first thing that will be lying bottom of the ocean.That's if it doesn't run out of diesel first :o)

AnonymousJanuary 5, 2014 at 1:30 PM
You dont seem to know very much about naval operations do you,this ship is very unlikely to be diesel powered it will either be steam or gas turbine,by the way most of the worlds navies are liquid fuel powered even most of the ships in a us carrier group are powered that way only the carrier and the submarines are nuclear,the chinese carrier is one of the largest in its class,indeed only the us carriers are bigger,in any regional conflict this would give the chinese a huge advantage over any of the regional navies who have nothing that comes close to this

IRI has tagged its navy as "strategic force" since some years ago. This focus on the navy puts it besides the missile force as the main two strategic arms for both defensive but also offensive operations as it enables you to project power beyond your borders. As such Iran is investing heavily in modernizing its navy and satisfying its needs by domestic manufacturing as much as possible. Iran will within a decade have 12-18 submarines of mid-size class (up to Kilo class size) which will mainly patrol Sea of Oman, Indian Ocean, Gulf of Aden, Red Sea and the Med. Sea. Iran's smaller subs (Iran has numerous small subs) will take care of Persian Gulf territory and they will be mainly operated by IRGC Navy. Iran has realized that its technology gap with the West is much less when it comes to sub-surface vessels and as such it will expand its submarine fleet. Iran will also attempt to build a small helicopter/drone carrier and also nuclear powered submarine for presence in Atlantic Ocean. On the surface Iran is focusing on building more smaller battleships or frigates in order to become more of a blue-water navy. In the long-run Iran-Russia and China will create a triangle for safeguarding their main interests at sea and India will play an increasingly important role with its vast coastline specially in the Indian Ocean. Right now it is not clear in which direction India is developing, i.e. more towards US and the West or more towards Iran-China-Russia triangle.

Anon 2:27.....The aircraft carrier in question uses diesel for its fuel. If Chinese confront US in war this will be the first to be used as target.

It's what he said which counts. So I said,good one. Now go and troll elsewhere.

You are quite right. Steam powered. Endurance 47 days. More than enough for operations in the East China Sea.

An excuse for the fact that you obviously don't know what you're talking about.

Anon 7:49,drawing silly pictures just shows you have to much time on your hands.Need to leave your computer behind and go out into the real world.

The real world where people can speak and write properly, without mangling simple and common phrases?