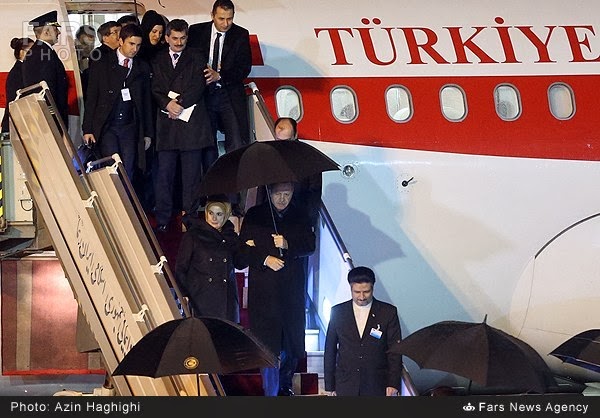 Turkish Prime Minister Recep Tayyip Erdogan arrived in Tehran Tuesday evening. He will hold talks with Iran’s supreme leader, president and foreign minister during his stay. The expansion of economic ties, especially oil trade, and the Syrian civil war are expected to top the agenda.

THE beginning of the end of the Syrian war -that will herald the ultimate shame of the US /AL QAEDA axis!

Back in 2009 the corrupt and despotic Islamic terror regime gave Turkey $18 billion cash and gold when they "accidently" drove the truck into Turkey. Maybe Erdogen has gone to Iran for more stolen Iranian money by the terrorist regime?

Iran gave Turkey 18 $ Billionen Gold ?
neither you know what is 18 Billon $ nor you know that Iran Import Gold from Teurkey as payment
for oil ., not vice versa

even the Money back to Iran after lifitng the sanctions are only 4 Billion $ and Iran is very happy for this Money.
now you are talking about 18 Billion $.

Not really. Regardless of the usual repetitive rants, the facts remains that Iran is now the only real superpower in the region and that is not lost on Turkey which initially supported the Wahhabi terrorism against the legitimate government of President Assad. However, Iranian position has been vindicated as the courageous Syrian leader is not going anywhere. BTW, Turkish forces today attacked the Wahhabi cannibals in Northern Syria. Iran and Turkish trade is poised to grow five fold over the next decade as Iranian energy exports dominate the Turkish economy. Iranian economy will grow by 8% this year even if limited sanctions relief is applied, which is not possible as the floodgates are already open with European and Asian business and investment lining up.

Anonymous January 29, 2014 at 1:05 AM, yeah, because arming terrorists and enforcing "regime change" in the region has been a roaring success so far!

Instead of coming up with smart ass answers go and look up the Turkish media archieves.
Then you will see what $18 billion in stolen cash and gold will look like.

anon truck load of gold and dollars-
'Turkish media archives ' is the only source you have of that irritating lie?

It's no good B.M.A. Your irritating stance on behalf of your thievish ideological masters is just plain obnoxious.