Syria Peace Talks Get Underway in Syria - Signs of Progress 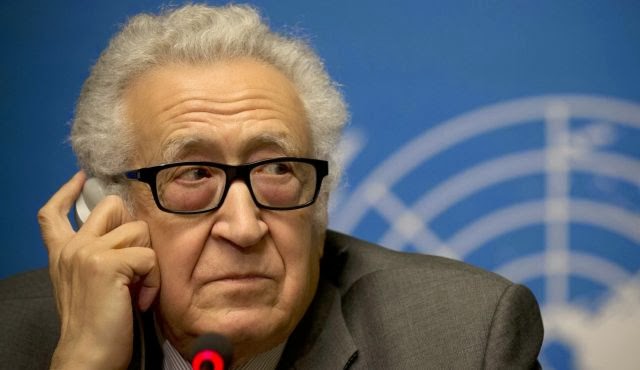 A face-to-face meeting between the Syrian government and the opposition has started in Geneva. This is the first time in three years of civil war that the two sides negotiate face to face. UN special envoy Lakhdar Brahimi is presiding over the meeting.

UPDATE: The first meeting between leaders of the Syrian government and the opposition was tense but lasted three hours. An opposition spokesman told reporters after the meeting that the two sides will begin discussing formation of a transitional government on Monday. (NBC News, 25 January)

Actually "the opposition" is comprised of Syrian exiles that have no sway on the armed groups fighting in Syria.

And "transition" for Syria, Iran and Russia means an election that includes Assad as an incumbent potential candidate.

Mark, you are on point as always.

Why should the syrian people that still would like to see Assad in power not be able to atleast vote for him.

How about the other foreign terrorists like Hezbollah aka Islamic terrorist regime that support Assad? You really believe that Assad the mass murderer is a "potential candidate" ?

Mark, could you explain then why the Russian and Syrian governments wanted to have this meeting held with the opposition? And the Syrian government agreed to continue the meeting next week? Was that just a cynical attempt on their part to portray that they wanted to negotiate, but didn't really mean it, or is it that you are missing something here?

I believe the Assads have been "incumbent" candidates in elections since approximately 1971. Baathists in general, and the Assads in particular, somehow always have a way of being "incumbents" in elections and then "winning" those elections.