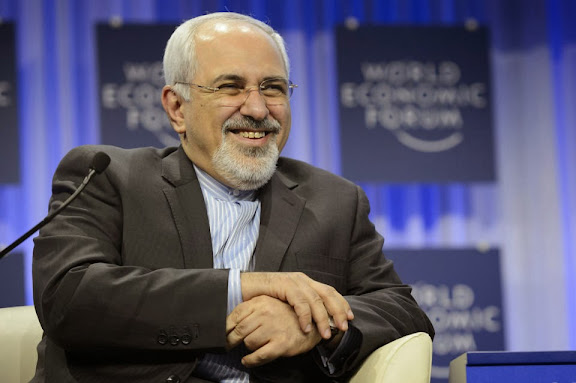 
Iran's foreign minister called Friday for foreign fighters to leave Syria so that its people can decide their future themselves.

Speaking on a panel discussion about the Middle East at the World Economic Forum, Iranian Foreign Minister Mohammad Javad Zarif said Iran also wants to see an end to foreign support for opponents of President Bashar Assad's government and recognition by all sides that there can be no military solution to the conflict. He said Tehran hoped for a negotiated settlement.

Syria claimed from the start that its current conflict has been a fight against armed groups involving foreign fighters. For a considerable time this was a matter of dispute but no more. The foreign fighter, Al-Qaeda affiliated threat has now spread like spilled milk, from Iraq to Syria and now Syria to Iraq, where Iraqi Army and security forces are now engaging ISIL fighters in Anbar province. Akwardly, United States policy finds itself supporting Iraq's fight while working against Syria's fight, in the two Middle Eastern countrys' conflict with the same enemy.

A line of disagreement between Iran/Russia and the United States lies on the issue of including President Assad running in elections that are said to take place in 2014. The Iran/Russia position states that the Syrian electorate should be allowed the opportunity to vote for Assad and his government in a free and fair election, while the American and Western allied position maintains Assad must be excluded. It's this Iran position that prompted the American demand that the UN retract its invitation to Iran for attendance at the Geneva II talks.
Posted by Mark Pyruz at 7:37 PM

Zarif did indeed talk about foreign fighters in Syria, but conveniently did not mention, or indirectly allude to, at least three groups: The Quds Force, The Lebanese Hezbollah, and the Iraqi Shia militia groups, sponsored by the Quds Force. They are all foreigners. And they are all fighters. So they must qualify as foreign fighters, don’t you agree? And they all should leave Syria, along with Al Qaeda-affiliated and other terrorist groups, and let the Syrian people decide the fate of Syria.

Does anybody remember eventually George W. revealed that one of the reasons he attacked Iraq to have the extremist there, (another word keep them busy but) not in USA

You seem to be forgetting that their presence only began when extremist foreign fighters decided to show up @ the Syrian conflict and attach the shia population.

This may also be surprising news to you, but many of the Syrian population whom are stuck @ rebel held areas, are not happy with the imposed Sharia law. They may favor voting for the current syrian government.

Why should these people not have this option?

I said the three groups should leave, along with ALL foreign fighters. Don't you agree?

Sharia law imposed by extremist Islamic groups doesn't surprise me. And that thinking is not limited to Sunni groups. There are some Shia Ayatollahs and groups in Iran who also would like to impose Sharia laws in the country, if they could get away with it, people like Mesbah Yazdi. I am very familiar with it. All progressive people, including Muslims, should fight against such ideas, whether in Syria or elsewhere in the Muslim world.

Assad family has ruled over Syria through a ruthless dictatorship for the past four decades. Please send your comments to Bashar, telling him that citizens of the country should have option, and ask him to accept democratic norms. Syria and its glorious history are much larger than one person or one family. Bashar should not confuse himself with Syria. And likewise, you should not confuse Bashar with Syria.

@- SHARIA law is a blessing upon Muslims and the world at large!. Ayatollah Mesbah, like any other Muslim cleric rooting for sharia is only quoting the HOLY Book .Muslims will always root for sharia law til the end of time for this is a tenet .Disaster is when you say 'all progressive people,including Muslims should fight against such ideas, whether in Syria or elsewhere in the Muslim world"-what are you saying Nader?-are you telling Muslims to revolt against their own book of guidance?.What if,per chance a Muslim Nation votes for sharia law in a referendum ,would you call that democracy?.

@-With the fighters in Syria seeing their efforts reaching a dead end, the WEST is slowly coming to terms with the reality that IRAN is and was on the truthful side of the conflict.You bemoan the participation of Hezbollah ,and the Qud's force and make a wish that they 'leave along with the others'!.Do you try to lambast the west for training the fighters,arming. them,rallying the whole world to 'love' them though they are cannibal losers!. YOU are the ONLY one in the west wishing for the end of the conflict ,NOBODY says so!.The day the masters of democracy stops funding and training these Goons is the same day democracy will have a chance in that country.

@That the Assad family has ruled through a dictatorship for some four decades is NO reason for the west to support genocide in that Arab country.If this is the standard then why single out Syria while the world has so many old ruling families but wont see the wrath of the west .

Nader you seemed to dodge the main point the previous person made and address the sharia point which was a side point really.

Foreign shia militants showed up after a huge influx of foreign salafis which are very anti-shia. So when Zarif said he'll like to see ALL foreign fighters leave he has no problem with shia foreigners leaving as well.

I could address your point about shia scholars on sharia law but i dont want to digress. Needless to say history and writings show us a fundamental difference between how shias want to implement sharia compared to salafis.

B.M.A,
Mesbah does not recognize the “republic” part of the Islamic Republic, does not see any needs for a democratically elected parliament to pass laws governing the Iranian society. He believes in Velayat Motlaq, or the absolute rule by the Islamic leader over the country and the society, based on Sharia. Very much the Shia version of what the Taliban established in Afghanistan, or the Al Qaeda and its affiliates want to establish in Syria and Iraq. All progressive Muslims should indeed oppose this oppressive and reactionary ideology.

And yes, I do advocate an end to the civil war in Syria; and an end to the presence of armed foreign militias in the country, whether Al-Qaeda affiliated foreign groups, like ISIS, or foreign Shia fighters, such as the Lebanese Hezbollah or other Shia armed groups also sponsored by the Quds Force. Any problem with that?

On the WHOLE ISSUE of Syria war ,you are proving a very formidable body armor!! shielding THE US from bullets !!.

Heritage and citizenship are not based on sectarian differences. So no foreigner taking arms in the Syrian civil war can claim he/she is fighting for his heritage and her people. Syrian people have, and always had, their own heritage. They don't need the Hezbollah or ISIS, the Lebanese, the Iraqis, the Iranians or the Gulf Arabs define it for them. (Nor do they need Zarif or Kerry or Lavrov do the job). Damascus was a center of civilizations before we had any Sunnis or Shias.

Nader Jan, your position of argument is a weak one.

What you are basically saying in your latest comment is that the whole world should stand back and watch the extremist rebel groups kill the shia population,

If I can draw a parallel, the nazis also killed and massacred the jews living in germany, and the world stood back and did nothing.

If such events are not to take place again, why are you supporting the do nothing policy? Is it because Assad is not a western ally?

Another example is Bahrain. If the shia population there all of a sudden came under large systematic death targeting, you can bet that Iran will not tolerate that. However, the monarchy in bahrain has been able to avoid large shia death tolls, and hence iran has not intervened yet.

Do you see your own double standard views now?

You have your facts wrong. There are more foreign Shia militia fighters, including the Hezbollah fighting in Syria today than there are foreign Sunni extremists and terrorists. And for your information, the majority of Syrian population is Sunni. So happens that Assads, representing a minority in Syria, have ruled over the majority for four decades trough dictatorship. So the solution is evident: ALL foreign fighters, Sunni and Shia, should leave the country. A ceasefire should be held between the government and the Sunni opposition. A transitional government acceptable to both should oversee a transition to a permanent elected government. In other words, the killing should stop now.

You might argue that is a tough thing to do, and I agree. But that's the only way, no other choice but a political solution to the problem.

If you support the Bahraini people aspirations to have a democratically elected government, which I agree with that goal, and can see that the Sunni royal family had ruled over a majority Shia population with force, then you should also accept that four decades of rule by the minority Alawites over the majority Sunni population in Syria also needs to come to an end. Sorry, you cannot have it both ways!

Anonymous January 25, 2014 at 1:38 PM, "If such events are not to take place again, why are you supporting the do nothing policy?". That's a good question.

"Is it because Assad is not a western ally?" That's the motivation of the people who support those al qaeda groups attacking Syria. They openly and unashamedly, support religious extremist terrorists.