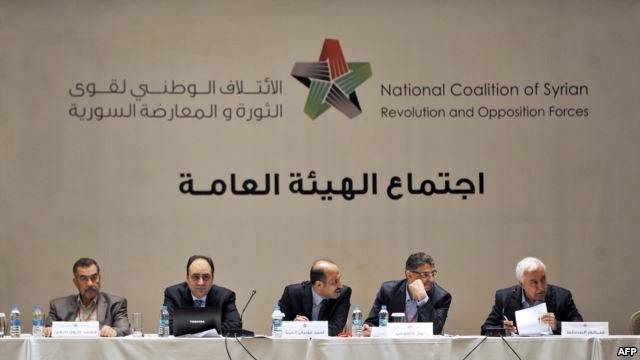 The Syrian National Coalition (SNC) announced today that it will attend next week’s Geneva II conference aimed at ending the country's bloody civil war. The SNC's General Assembly voted 58-15 in favor of attending the conference. The decision would bring the rebels face-to-face with the Syrian government representatives. (AP, 18 January)

Recent information deny previous lies of "freedom fighters' and the US administration that Bashar Assad had used chemical weapons against civilian population.

Former UN weapon inspector Richard Lloyd, and Theodore Postol from the Massachusets Institute of Technology, denied a possibility, that missiles with chemical agents were launched from teritories controlled by the Syrian Army.

So, is it another American lie, in a chain of their lies, during their short history of the statehood???

SYRIAN National coalition of Idiots!- that can't see the West evil plot of arming them to fight for 'democracy' while at the same time them, West ,ARM zealots,hard core AL Qaeda fighters ! to kill you in a very spectacular self defeating initiative by the west.

It was the Syrian government that agreed to dismantle its chemical program and have the UN agency destroy its chemical stockpile. Now you are quoting two individuals as denying that Assad ever used the chemicals. Then why should Assad agree to the destruction of his chemical stockpile? Why should Russia and Iran pressure him to do so, if he was not indeed guilty? Of course there are people who can deny anything, including the Holocaust!

The zealot Al-Qaeda represents the extremist Sunni ideology. I suppose you don’t want to believe, and have no intellectual honesty to accept that these extremists are part of a larger Islamist extremist movements; by saying they are controlled by the West, you want to deny the existence of a serious problem within the Islam today. If the Muslim world could not find an answer to this problem, the Islamic movements in general will suffer.

Was Assad stupid to accept removal of chemical weapons when it reality, as you claim, they were used by Al Qaeda?

Nader UskowiJanuary 19, 2014 at 2:18 PM
You seem to be deliberately avoiding the fact that Assad did this only to avoid an american attack on his nation,that was why Assad agreed to the deal pure and simple not out of any guilt or responsibility for these incidents.The americans had done this sort of thing previously in iraq,libya,afghanistan and many other nations using whatever pretext they could to attack these countries,unless of course you`re denying that an attack was going to take place and that the us has done exactly these sorts of things previously,it sees to me that you`re the one playing the denial game here

AnonymousJanuary 19, 2014 at 3:39 PM
Well said,it is up to those making the allegations to prove them

WELL hope until now you are able to separate b/tween Sunnis and 'Wahhabi'.However you are right to point that there is a problem in Islam today and inshaAllah we shall share those facts in the future.But you have a mountain to climb in justifying why the west is courting these zealots to fight a government and pretend to trust them to bring democracy in the country while the whole world know that these people will never come near that ideology and will strive instead to bring Sharia.
-why do the west trust al Qaida as opposed to Assad who have promised to hold fair polls.Why do the west suddenly turn against a long time ally and rally the world against him and go further wish him hanged or killed somewhere.THERE IS a notion and belief among the clerics in the Muslim world that ,'like the DEVIL himself'-.when the West smile on you,You have to worry indeed!!.
But the issue of some Islamic movements is true and this is the reality-

@-ISLAM -is the only religion in the world that is not complete without its own Government.This is to say that every practicing Muslim Worthy his salt would wish to live and governed by the tenets of the HOLY book.However it forbids force or violence to force or impose itself.ANY ONE out THERE killing , maiming in the name of Islam will stand responsible for his deeds as violence and savagery has no basis in ISLAM.

@-ISLAM again is the only religion that commands its followers to bind together and not bicker among themselves and if there rises any issue that brings a friction, then THEM Muslims are commanded to return to the Book for guidance and reach a consensus on that issue[it is a disaster to see a Muslim killing a Muslim,a Muslim imposing his views upon a Muslim,a Muslim siding with a non Muslim to sabotage and silence a fellow Muslim].

@- ISLAM again is the only religion that commands its followers to read, learn,from non Muslims anything that is beneficial to mankind.disaster today is when you see AL Qaeda COMMANDING PEOPLE NOT TO READ as we saw in Afghanistan ,Somalia and Nigeria's boko haram[western education is haram]!-BUT we see their fighters holding AK 47 rifles and riding Russia tanks!.HOW THE HELL CAN RUSSIA'S AK 47 bring a caliphate?!.These brothers ,how can a Motorola walkie talkie and a tank bring about a caliphate ?.HOW do you buy a weapon from your enemy and expect to defeat that same enemy using his weapon?.-Wahhabi clerics HAVE SUCCEEDED in portraying ISLAM as the most backward religion in the world denying Muslims the freedom to read and learn but wish to use technology to advance their agenda.

no wonder the west supply them with 'high tech tools' to win battles and feel superior!.

WHEN the Holly book commands unity love and peace in the house of ISLAM ,it meant that the world would live in peace!.
so then every problem befalling Muslims have its solution in the holy book?and every predicament is a result of them Muslim running away from the teachings and honest translations from the book of guidance!.

Why do want to identify all Sunni groups with Al Qaeda? It must be convenient to lump them all together under Al-Qaeda brand, at least more convenient for the Shia extremists.

Shia-Sunni conflict is only a part of the larger conflict within the Muslim world. Sunni-Sunni conflicts are even more critical and bloodier these days, pitting the pragmatic/reformist strand of Sunni political groups, such as Muslim Brotherhood in Egypt and its counterparts in Turkey, Morocco, Tunisia and elsewhere, against the extremist Salafi groups, such as Al Qaeda and its affiliated terrorist groups.

Al Qaeda in Syria (ISIS) is as much against “Shia” Assad than is against other Sunni political groups in Syria and the West. ISIS advocates adherence to an extreme reading of the Sharia, and wants to establish an Islamic state based on that ideology in “liberated” parts of Syria, and Iraq and anywhere else it could. The Muslim Brotherhood parties do recognize that the Islamic governments must recognize the necessities and requirements of the contemporary world.

And of course we have Shia-Shia conflict as well. In Iran, for example, pitting the adherents of extremist view of Velayat Motlaq, absolute rule by the leader, as opposed to adherents of a more pragmatic and reformed form of Islamic government.

Not surprisingly, the moderate Shia and Sunni groups have much more in common than to their extremist fellow Shia’s or Sunnis. It is a historic conflict between two views of Islamic society and government.

In Syria, all progressive opposition groups need and must distance themselves from the extremists. Arguing that all opponents of Assad are Al Qaeda type comes either from an ignorance of the political realities in today Muslim world, or is an attempt to justify an undemocratic form of government by people who are closer to Shia Islam.

There is nothing "democratic" about the groups attacking Syria, unless your definition of "democratic" is child soldiers, persecuting minorities, beheadings, cannibalism and forceful imposition of saudi/wahhabi law.

Read my comments again. All progressive opponents of Assad dictatorship need and must oppose Sunni extremists as strongly.

Uskowi, that is not happening. The extremists are an integral, major part of the militants attacking Syria. They are needed by the rest who can't afford to lose them.