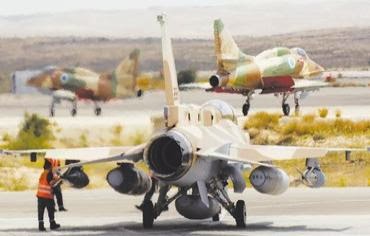 The opposition groups also claimed the airstrikes targeted S-300 battery launcher. But it was not clear if the Syrian military had even received the state-of-the-art Russian air missile system. Last December, AFP quoted Russian President Vladimir Putin as saying that Russia had delivered some components of S-300, but not a complete system yet. It was not clear what components had been delivered, and if the Israelis were targeting those components yesterday.

In October, Israel conducted air raids against a missile base near Latakia. In September, Israel attacked an arms depot in Latakia.

The supreme Isreali Air Force always gets the job done, every single time.

The scoundrels in Tehran should take note!

Russia sucks at delivering anything it seems. What kind of ally are they? Compare the commitment between U.S. and Israel to that of Russia towards Syria.

Actions such as this one are obviously illegal since Israel has not openly declared war on Syria and has never set any kind of dead-line for the commencement of military force. Israeli insistence that these actions are simply preventive measures do not hold in an international court of law.

When will the mighty Assad-Mollah axis respond to these repeated, humiliating attacks by Israel? May I venture to guess never?

WHO knows the IDF jets targeted open farming fields ! or warehouses of relief food.And the opposition LYING once more!!.
As the Syrian Government focusing on containing the Rats and securing cities with little concern from external fire , IDF finds a sitting duck out of the Syrian military capitalizing on that and makes a hit and run ,then pretend to be invincible!!.

A Conservative Estimate of Total U.S. Direct Aid to Israel: More Than $130 Billion

In your dreams.
If you could do it alone, you would have done it by now. So ,stop your barking.

Take rest, responses to shallow propagandists do not make senses, and may further legitimize them.

This is another made up "news" which somehow proliferate these lame sites. Even denied by the Zionist media.