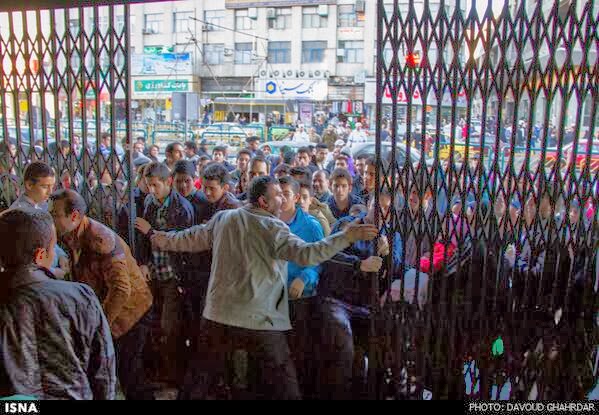 Today theaters were free in Iran to promote movie going. This is how people seized the day. (@HadiNili/Twitter/ISNA)
Posted by Nader Uskowi at 6:42 PM

So, your despised regime is not so bad for the Iranian people, where they can enjoy free movies, and where there are no daily bloodsheds like it is in many of the neighbouring "democracies", sponsored by your beloved West and the US.

With all the money the regime has stolen and put in their bank accounts as well as giving it away to the likes of Syria and Lebanon. Is it a wonder that the theaters are "free" for one day?

To Anon 9:45 PM....Don't live in blissful ignorance.There are "daily bloodsheds" inside the hidden dungeons of Iran.

Get out of the west and go live there

Would you be willing to quote, how much money was stolen and transfered to other countries by the Pahlavi's family of the last shah and by his other cronies ??

In the US, there are plenty of minority groups, which complain about police brutality, killings ....racial discrimination, profiling and fascism !!

There you go again with your daily diatribes about an issue that has no relevance in todays Iran what so ever. What ever they have "stolen" according to legend pales into comparison when compared to the Islamic republic of liers,thieves,rapists and murderers. Khameini's decoy Babak Zanjani alone has stolen billions of dollars. And now he has been "arrested" to cover Khameini and his "cronies" tracks.
When it comes to "minority groups" the Islamic republic of rapists and murderers is abysmal to say the least. Their persecution of Bahai's,Kurds,Arabs,Baluchi's,Jews,Christians,Christian converts and specially women is well documented. There is not a single day that goes by in the Islamic republic of tyranny and hell that you don't see executions and disappearances on mass. Now that's what you call real "fascism"!!

So according to you, the Islamic Republic stealing from the nation is bad and unacceptable but, when the Pahlavi family did it, that is acceptable?

It looks like you are the author, who under pretexts of nonrelevance issues, tries to ostracize others when they try to reply to your or others demagougery.

Like everyone else can see, an essence of my comments is addressed to the Anon at 10:56 PM, and also to your "countless" statements, where at any opportunity you despise the leadership of the Islamic Republic with accusations about its brutality and irresponsibility.

You also let other "commentators" to spew their rubbish and slanders at others......and then you do not mind that they have "no" relevance to.....something.