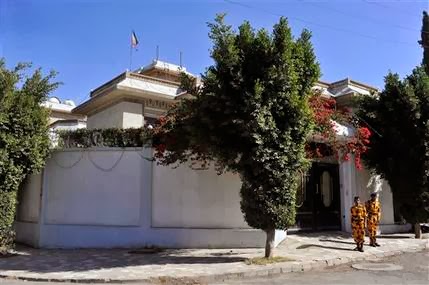 A Yemeni official told AP that the gunmen first attempted to kidnap the diplomat by stopping his car. When the diplomat resisted, the assailants shot him and fled the area, which is a busy commercial district.

Another Iranian diplomat was abducted by gunmen in July and remains in captivity.

Al-Qaeda for Arabian Peninsula is believed to be behind the attacks. Iran has been actively supporting the Shia insurgent group, the Houthis, in the ongoing sectarian conflict in Yemen.

He who lives by the sword shall die by the sword-THIS hired gun man will one fine day stand trial in Tehran!.

I second you brother

-NOW, before you make some fool of yourself trying to rail on me using all tricks in the books, let all and sundry know that , all the education your parents sacrificed for you was not enough to kill the demon of racism on you!.well it is easy for you to learn this-
@-Living in Africa or Nigeria according to you does not necessarily mean you are black man!.
@ Living in the west ,supporting or sympathizing with the Palestinians does not necessarily make you a Muslim
@-Inside Iran there is a small black population ,virulent supporters of the establishment and some sharing some diverse opinion ,-seriously speaking you are a very sick man and you need a self reevaluation.

But anon black brother, -you must be a very unhappy man in this world in general and here on this blog in particular- for issues of race and stereotypes are issues too alien on such a modestly respected blog -which has a following from HAIFA in Israel to Pretoria,many people coming here to see what the Iranian opposition has to say about the country. Honestly speaking you must be a very old Man living your world of the old, refusing to change with time!.Unknown to you, you have been scoring own goals and only shaming the one who brought you up.
-once again, here is some food for thought-"
stupidity is like fine wine -it matures with age!.-meanwhile you can start your journey to being a less western fan boy by watching this full documentary on You Tube-North Korea exposes western propaganda'
I believe this can be your first step to being a wise man!

B.M.A. brother why are you angree with a black man being in this forum. The one who is brining up black is you. If I said Palistinian Brother it would have been OK for you? I am dissapointed with your remarks!! That is all I can say man

So-called "Black Brother", why do you have to bring up the subject of race?

both BMA and black brotherr have no reason to be in this forum. If you are both from Nigeria move on guys. what are you doing here unless you are paid to be here.

-you are the same guy [black brother] but desperately using matrix to fix B.M.A and have him driven away !.-you are a genius and your demons are working miracles for you!!