Islamic State of Iraq and the Levant in Control 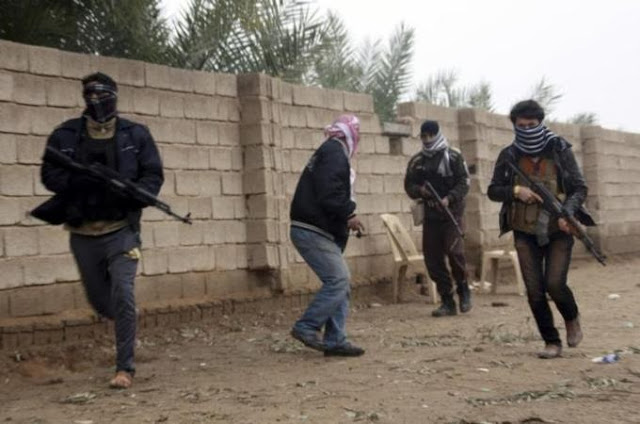 An Iraqi government official told AFP today that the government has lost control of Fallujah to Al Qaeda-affiliated Islamic State of Iraq and the Levant (ISIL or ISIS) fighters. Videos also showed ISIL in control of the main Fallujah highway. (AFP/Al Jazeera, 4 January)

“We will not back down until we end all terrorist groups and save our people in Anbar,” Maliki said. (Al Jazeera, 4 January)

The ISIL has announced that its goal is to establish an Islamic government in the Sunni-dominated Anbar province, near the Syrian border.

The situation in Anbar shows the civil war in Syria is spilling over to Iraq, threatening full-fledged sectarian war in the country.

Actually, it's more complex than just a "spillover."

According to Crooke back in 2011 when the Syrian conflict began, and counter to the narrative that "the Syrian people" were simply uprising against a "brutal dictator" and the conflict began with a government response against peaceful protesters, the Syrian armed conflict actually started with armed groups that had failed to win in Iraq and crossed over to Syria. Now they're well financed by Gulf sources and better armed, and like the map I linked to yesterday, have spread out in and from Syria back into Iraq.

And why am I not surprised! The easiest thing for Crooke to prove his point is to change the facts. Please go back to the videos of the early demonstrations, including some posted on this blog, to see the peaceful nature of the movement.

This is not the first, nor would it be the last time that an anti-dictatorship movement has ben hijacked by non-democratic groups with their own agenda. In Syria, the extremist Islamic groups were not against Assad’s dictatorship per se, but against his secular agenda they saw as anti-Islamic. And they took advantage of a popular movement to try their luck at establishing an Islamic state in Syria, and now in Iraq (please note ISIL is now the leading Sunni extremist force in both countries.)

A Western source is reporting this development in Iraq with fanfare and lots of twisting.Yelling loudly that IRAN is defeated by the ISIS ! by the mare fact that it had all along supported the Iraq Government onslaught on terrorists on that troubled Anbar province .

You should not take the threat of extremist Sunni groups lightly. Since the Iranian revolution, the extremist Islamic movements have become major threats to the stability of the region. Let's hope the Iraqi government could open up and become inclusive in order to unify the country against the Al Qaeda.

HOW i wish the powers that be!- share your humanist opinions and convince the BAHRAIN King make radical political changes that will incorporate all in his government so as to forestall a future Iraqi scenario!.

The article will expand further as the situation continue to unravel.