Lieutenant Commander of the Iranian Navy for Operations Admiral Siyavash Jarreh announced that the Navy’s 29th Flotilla dispatched to Atlantic Ocean is slated to berth in a South African port.

The Iranian Navy dispatched its first fleet of warships to the Atlantic Ocean in a ceremony participated by Navy Commander Rear Admiral Habibollah Sayyari and his deputy Rear Admiral Seyed Mahmoud Moussavi in Southern Iran on Tuesday.

“The 29th Flotilla will berth in South Africa during the course of its mission,” Admiral Jarreh told FNA on Wednesday.

The flotilla, which is the first dispatched to the Atlantic, but the 29th one dispatched to the international waters, consists of Khark logistic and helicopter-carrier warship and Sabalan destroyer. The warships should sail 25,000 nautical kilometers in the next three months. 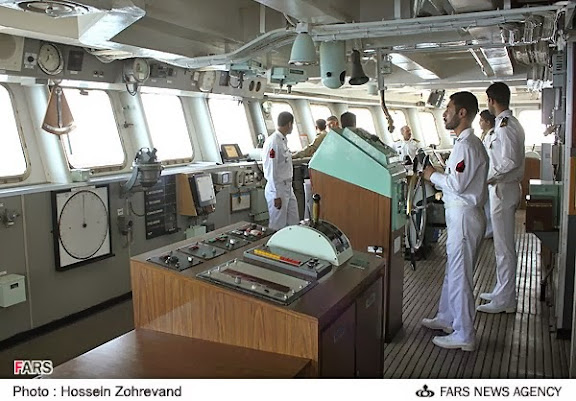 not really ! try something else !

and his cousin Black Brother!

The Iranian navy is very impressive, when compared to that of Uzbekistan.

Yossi at 3:35 PM
And to your "general" skills, like stated by Jabbar.

Uzbekistan is a landlocked country, they don't have a navy.

Iran's navy is currently comparable to that of Azerbaijan and Kazakhstan.

I think some people here are trying to undermine the Iranian Navy by comparing it with nations who don't have a strong naval force. Iran is currently the 5th most powerful submarine nation in the world (disregarding nuclear subs):
http://www.globalfirepower.com/navy-submarines.asp

So Iran should be compared with more powerful nations.

Iran's surface navy is not ranked as strong by global fire power, having a couple of dozen submarines and practically no deep-water surface navy doesn't mean that Iran's navy is worth much.

That is your opinion. The sub-surface technology gap between less advanced and most advanced countries in the world is much less than the surface one. In order to get the highest return-on-investment Iran has focused on its sub-surface capability which is the smartest choice. At the same time Iran is slowly modernizing its surface fleet but that is not where Iran is looking for an e