No Preconditions on Shape of Future Government 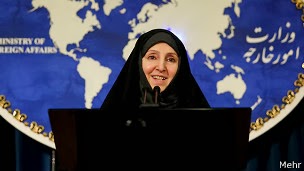 Iran today brushed aside a U.S. offer of a sideline role in peace talks on Syria, scheduled for January 22. Iran said it would accept offers to attend the Geneva II talks if its honor is respected.


"Iran has always announced its readiness to participate (in Geneva II talks) without preconditions," foreign ministry spokeswoman Marzieh Afkham said in Tehran. "(But) Tehran will only accept offers that preserve the honor of the Islamic Republic," she added. (IRNA, 6 January)

On Sunday, US Secretary of State John Kerry had said that Iran could participate in Geneva II from the sidelines, and if it accepted that the goal of the conference is to work out arrangements for a transitional authority that would govern Syria if Assad could be persuaded to resign.

It's interesting that there could be two different renderings on the outcome of Geneva I talks, on the one side that perspective held by the U.S. amd the other Russia.

It's understandable the U.S. doesn't wish to add to those espousing Russia's view by including Iran.

However there can be no realistic peace process for Syria (and now Iraq) without Iranian participation. For humanitarian grounds and the interest in ending hostilities, our American position should shift towards one of inclusion rather than exclusion.

The Iran must abandon his ally President Assad and must say to Syria Armee do not shoot then he is allowed to participate in blablah conference ???!!!
The american are lost their mind. They are out of Reason.
THE US-System is rotten System where a minority of Jews-AIPAC lobby dictate everything

forgert the conference and forget the American
Between US-Iran will be never a peace or a deep understanding.
They are ruled by Jewish lobby

Not a Jewish lobby but, a zionist lobby.

Reminds one of the film with those crows, The Birds.

I like the little crows that fly around more than the nasty types in the photo above.