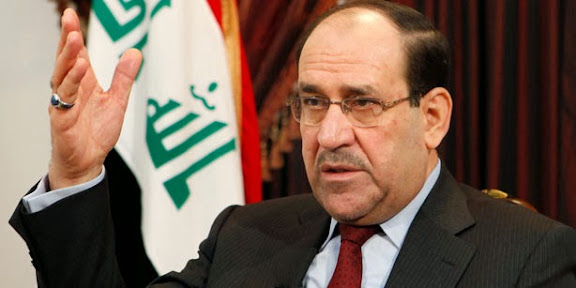 
Iraqi Prime Minister Nouri al-Maliki has called on the United States and its allies to stop providing weapons to the militants in Syria.

On Wednesday, the Iraqi prime minister said providing the foreign-backed militant groups in Syria with arms could further ignite violence in its neighbor, Iraq.

“I am appealing to the countries that talked about supporting armed groups in Syria with weapons. I tell them, you are supporting terrorism in Iraq,” Maliki stated in his weekly televised speech.

With more pressure on Syrian government troops, there is the potential for an expanded scope of operations for AQ linked forces in Syria and Iraq.

Earlier in the month Prime Minister Maliki went so far as to single out Saudi Arabia for supporting terrorist groups operating inside his country; as well as blaming Saudi Arabia, Qatar and Turkey for sponsoring terrorism in Syria.

File photo: Associated Press
Posted by Mark Pyruz at 2:22 AM

Now that even the American client leader of Iraq is saying it, it is time that Americans and others supporting the so-called "peaceful protestors", "revolutionaries" and "democrats" in Syria reconsidered their ill-considered, short-termist support for the militants (al qaeda); just because they are against America's latest enemy (the Syrian government).