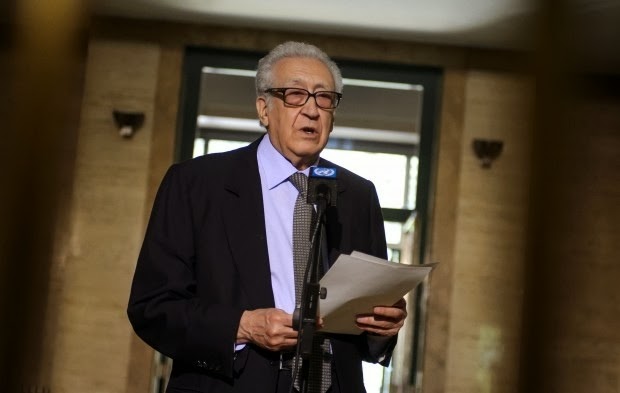 UN Syria envoy Lakhdar Brahimi said representatives from Syrian government and the opposition met in the same room at UN’s Palais des Nations for about three hours on Saturday.

“They have talked to each other this afternoon,” Brahimi told journalists at a Geneva press conference at the conclusion of the first day of joint talks. Describing the set up in the room, he said, “One delegation was at a table on the left, the other on the right, facing each other. They talk through me, to one another. ” (The Back Channel/Al-Monitor, 25 January)

“This is what happens in civilized discussions, ” Brahimi added. “I think it is a good beginning.”
The two sides discussed a possible agreement to send an aid convoy to the besieged city of Homs for possible approval on Sunday, Brahimi said. The two sides will also discuss prisoner releases on Sunday.

“The most important element discussed today was on humanitarian corridors for Homs, which has been besieged for the past 19 months without food,” Louay Safi, a spokesman for the Syrian Opposition Coalition negotiating team told journalists at a press conference Saturday evening.

“Now we are going through the preparatory phase of securing the release of detainee,” Safi said. (The Back Channel/Al-Monitor, 25 January)

The parties on Monday will begin discussing the formation of a transitional governing body, Safi added.

Photo credit: UN Syria envoy Lakhdar Brahimi reporting on the first day of talks between Syrian government and the opposition. Geneva, 25 January 2014. (The Back Channel/Al-Monitor)