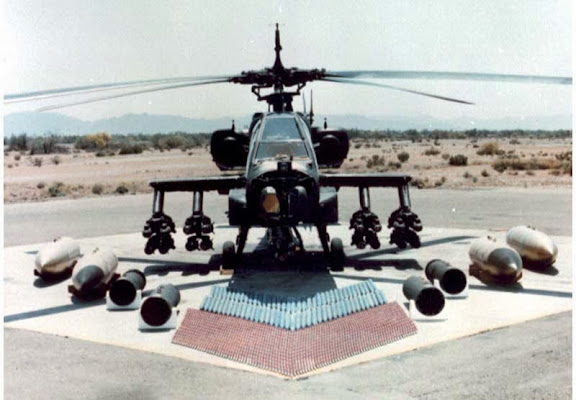 Above: weapon loadout of the AH-64 Apache attack helicopter

Regarding U.S. arms for Iraq, according to Reuters:


The Obama administration notified Congress on Monday of plans to sell 24 Apache attack helicopters to Iraq, part of an effort to bolster the military against al Qaeda-linked militants, after addressing lawmakers' concerns that held up the sale for months.

The Defense Security Cooperation Agency said on its website it had informed Congress of the possible sale of the Boeing Co-built helicopters to the government of Prime Minister Nuri al-Maliki, who is in a standoff with Islamist militants in the western province of Anbar two years after the withdrawal of U.S. troops from Iraq.

The administration also notified Congress of plans to lease Iraq up to six Apaches, which a U.S. defense official said would be used for training purposes until the purchased Apaches were delivered. The cost of the purchased Apaches, and the equipment and support that accompanies them, is worth about $4.8 billion, the Defense Security Cooperation Agency said.

Regarding U.S. arms against Syria, according to Reuters:


Light arms supplied by the United States are flowing to "moderate" Syrian rebel factions in the south of the country and U.S. funding for months of further deliveries has been approved by Congress, according U.S. and European security officials.

The weapons, most of which are moving to non-Islamist Syrian rebels via Jordan, include a variety of small arms, as well as some more powerful weapons, such as anti-tank rockets.

The weapons deliveries have been funded by the U.S. Congress, in votes behind closed doors, through the end of government fiscal year 2014, which ends on September 30, two officials said.

The situation in Iraq has now become in certain respects a mirror image of the situation in Syria, with artillery and airstrikes required in attempts to dislodge Al-Qaeda affiliated fighters from their positions in urban areas. There are also collateral civilian casualties, just as in Syria.

The Iraqis need arms shipments to combat AQ affiliated forces, if not from the U.S. then the Iranians and Russians as is the case with Syria. According to these reports they'll get them from the United States; naturally the Iraqis first choice based on qualitative superiority.

However, the opposite is intended for Syria, even though the main foes are the same as that in Iraq. Congress intends to arm "moderates" but in a conflict where the strongest armed opposition forces are Al-Qaeda linked, any support against Syrian forces indirectly assists AQ forces. Moreover by extension and in effect, relieved AQ forces in Syria potentially render assistance to their operations in Iraq.

Reposted below, map of Al-Qaeda affiliated armed forces area of operations and partial control in Syria/Iraq: 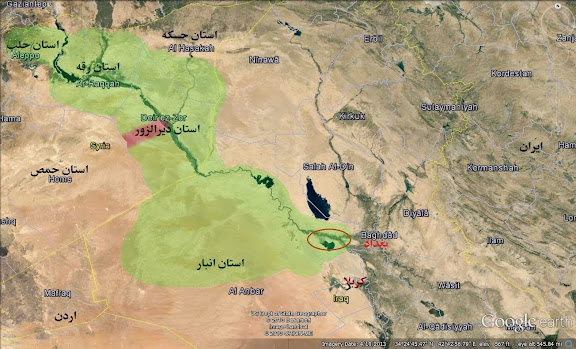 THIS IS A DYING confused Empire!!-AN ENTITY DRIVEN LIKE A SWOON BY LOBBIES!!.

Not "confused" at all ! They have cleverly started this war between two fanatical sides and now they are selling weapons to them. Iran must reject Islamic terrorist zealots and let Arabs fight each other. This is the fate of fanatical Islam.

With all the political problems Iraq is facing today, namely the inability of the central government to be inclusive in a quite diverse society, it is still a majority-ruled elected government chosen at the ballot box by the Iraqi people. ISIS wants to overthrow an elected government by terror and establish a fundamentalist Islamic state in its place.

In Syria we have a minority-ruled dictatorship in power for more than four decades that as part of the Arab Spring was challenged by a popular movement. ISIS wants to take advantage of the uprising and establish its fundamentalist Islamic state in any areas of the country it could. Arming Assad would mean above all arming a government at fight with the opposition representing the majority Sunni population. As long as the civil war continues, ISIS will take advantage of it. The solution is not arming Assad, but establishing a government of national unity in the country.

your solution is not practical in Syria,not anywhere in the Arab world.For your information Arabs wont sit comfortable on a round table and agree on anything.Wont live in peace in a government of national unity,Absolute rule by a Monarchy seems to be the most ideal system of government benefiting Arabs.It IS either absolute rule in a sharia model or a monarchy . YOU ARE slaughtering Assad Together with the peace and stability in SYRIA!.

You should know the meaning of being "confused". How are things in Nigeria?